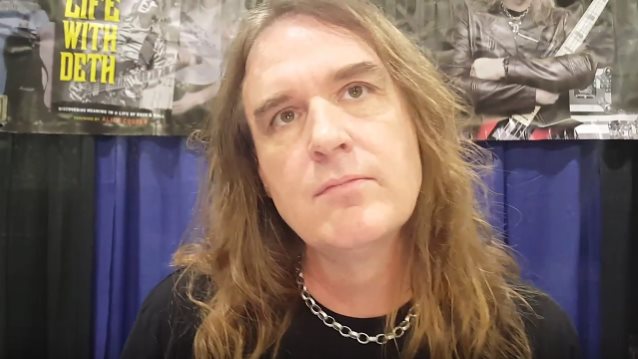 All Axxess Entertainment conducted an interview with MEGADETH bassist David Ellefson at this year's Terror Con horror convention, which was held February 25-26 at the Rhode Island Convention Center in Providence, Rhode Island. You can now watch the chat below.

Speaking about his early musical inspirations, Ellefson said: "Well, I'm from the KISS generation, which plays right into all this [that is going on at Terror Con]. When I growing up, certainly KISS… That made it much more than just guys singing and playing songs. There was this whole larger-than-life, comic-book fantasy about it all, and I thought that that was so cool. It's ironic, 'cause in thrash metal, we were kind of the opposite of that — [our look] was stretched jeans and t-shirts; a stripped down version of that. I think, with MEGADETH, we took that a step farther, because we conceived… We actually kind of conceived MEGADETH, really, before the band was even created, and I think that's why we're probably here all these years later, is that it wasn't just a random hit song that made us famous. We really strategically sat in me and Dave's [Mustaine, MEGADETH mainman] apartment with the early bandmembers and we formulated what the band is. I guess the same way you would conceive a script, a movie, and these movies would become franchises. MEGADETH was almost like that. There was 'Killing Is My Business', 'Peace Sells', and then every… It's almost like every album is like a sequel, because there's a theme. [MEGADETH's mascot] Vic Rattlehead's a part of that, the music has been very concise and very precise with what we sing and write about, and the playing has been very consistent, so I think it plays well to everything we're doing here at Terror Con."

In a January 2016 interview with the Cape Girardeau, Missouri radio station Real Rock 99.3, Mustaine took issue with a DJ's suggestion that he formed MEGADETH "together" with Ellefson. Mustaine said at the time: "No, that's not true. MEGADETH was already in its formative phase long before I even knew David Ellefson. The name MEGADETH didn't come up until after Dave and I had met. But there was another bass player before Dave."

He added: "Dave and I, we have a friendship that's been up and down over the years. I think our relationship is stable right now."

On February 12, MEGADETH was honored with a Grammy in the "Best Metal Performance" category for its 2016 album, "Dystopia".