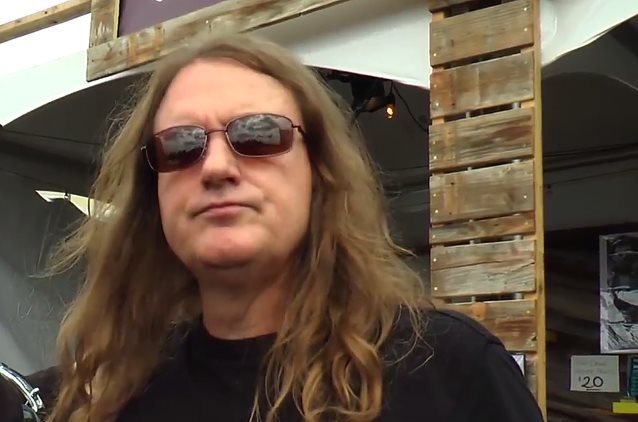 Straus Project conducted an interview with MEGADETH bassist David Ellefson on Friday, July 14 at the Chicago Open Air festival at Toyota Park in Bridgeview, Illinois. You can now watch the chat below.

Speaking about MEGADETH's latest album, 2016's "Dystopia", Ellefson said: "Well, it was a record that we… We probably worked on it for almost a year before we recorded it. And it took another six months or so, probably, to cut the record. It went through a lot of transitional things to get it to just kind of boil it down to the essence of what it really is. And I think what fans are happy about is they like to hear us being this MEGADETH that they grew up with."

He continued: "We've done a lot of different things in our career. We're a band that can write really intricate riffs, we're a band who can write great choruses and hooks. I think the trick with 'Dystopia' was sort of finetuning it and bringing all those elements together, because you can't be the band you were on your debut record, and you're not even gonna be the band you were on your last record, because life moves forward and developmens happen. And [LAMB OF GOD drummer] Chris Adler [who played on 'Dystopia'] was a big part of helping 'Dystopia' get focused. And Kiko [Loureiro, MEGADETH guitarist] coming in brought that… MEGADETH's always had two… Dave [Mustaine, MEGADETH leader] and then this other juxtaposed guitar player, and I think Kiko really complemented that well… And live, Kiko's an incredible performer as well."

MEGADETH has just completed a North American tour with MESHUGGAH and will play arenas later in the year as the support act for German hard rock veterans SCORPIONS.

MEGADETH is planning on returning to the studio at the end of the year to begin work on the follow-up to "Dystopia".