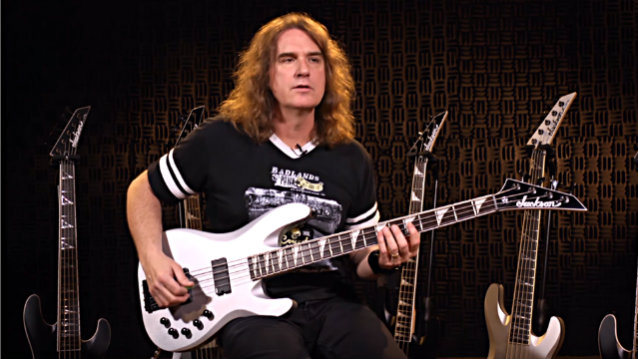 MEGADETH bassist David Ellefson was interviewed on a recent edition of "The Classic Metal Show", which is heard live on Saturdays from 9 p.m. to 3 a.m. EST at TheClassicMetalShow.com. You can now listen to the chat in the YouTube clip below.

Speaking about MEGADETH's latest album, 2016's "Dystopia", and the band's current lineup, which includes guitarist Kiko Loureiro (ANGRA) and drummer Dirk Verbeuren (SOILWORK), Ellefson said: "Well, I think, first of all, there's sort of a consistency to the sound that's remained throughout the years. I noticed it when Dave [Mustaine, MEGADETH mainman] and I got back together in 2010, that sound that people certainly like from certainly the classic days, largely that's Dave and I playing together, for the most part. Certainly people have different records they like, and some of that is because of the musicians that played on it, some of it's because of the production at the time, some of it's because of just the headspace we were in when we made those records."

He continued: "I think 'Dystopia', in a lot of ways, is kind of the best of the best MEGADETH has done. You know, the production is really strong, the riffs are incredibly complex, and there's also some very melodic stuff, like 'Dystopia', for instance, the title track. Yet there's things like 'Fatal Illusion', 'Death From Within', or just all these things, these tracks that are just really complex songs. And I think even some things that move MEGADETH into some new places, like 'Poisonous Shadows'. That's kind of taking… We've done things like 'À Tout Le Monde' and 'In My Darkest Hour' and some things that were ballad-esque, but 'Poisonous Shadows', I think, is something that really moved us into a whole new place that we haven't been to before. So I think there's just a lot of different stuff. And, of course, Kiko, it's clear what Kiko brought to the table."

On February 12, MEGADETH was honored with a Grammy in the "Best Metal Performance" category for "Dystopia".