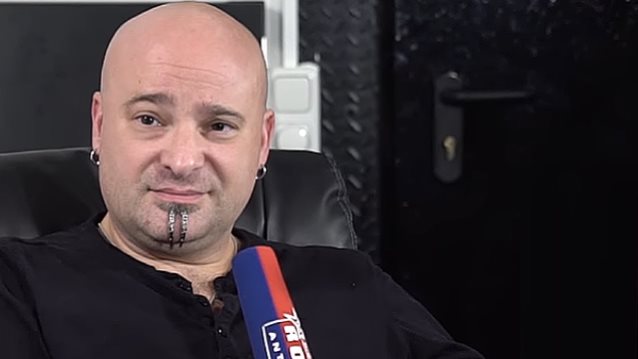 DISTURBED is planning to return to the studio later this year to record an acoustic EP before beginning work on the follow-up to 2015's "Immortalized" album.

Asked by Germany's Rock Antenne how long fans will have to wait before the release of the next DISTURBED album, vocalist David Draiman said (see video below): "Well, the plan at this particular point in time is to take a little bit of time off, spend some time with our families, get some personal stuff done. We have an acoustic EP that we're working on. That's something we've wanted to do for years that we just never had the time or the opportunity to. So that we'll be working on in between our LP releases. And then probably 2018 we will head back into the studio to record the next record and hopefully have a release sometime in late 2018 and hit the road 2019 again."

Draiman also talked about the overwhelmingly positive response to DISTURBED's cover of SIMON & GARFUNKEL's "The Sound Of Silence", which can be found on "Immortalized". Asked if the band has encountered any fans who discovered DISTURBED's music through "The Sound Of Silence" and came to one of the band's shows expecting to hear more similarly stripped down material, Draiman said: "I haven't seen any of that. No evidence of that whatsoever. In fact, the most recurring series of comments that I get is that people who were introduced to the band via 'The Sound Of Silence' cover then were so excited and curious that they tried to listen to a bunch of the rest of the catalog."

He continued: "Even though there is obviously a marked stylistic difference between the majority of our catalog and a cover like 'The Sound Of Silence', it certainly isn't the first time we've done an acoustic track. There is a track off the 'Believe' record called 'Darkness', which is also acoustic and purely sung as far as the vocal delivery is concerned. But I do believe that the saving grace and the binding cohesive element that people are able to embrace within our music is the very, very intense and strong and melodic nature of it. And so people who are brought in by 'The Sound Of Silence' find very powerful melody throughout the rest of our catalog. Some of it is more aggressive, some of it is less aggressive, so they don't necessarily fall in love with all of it, but they fall in love with a lot of it. And there literally isn't a fan that I see in the audience that isn't participating, jamming out and singing to just about every song."

Draiman added: "Granted, 'The Sound Of Silence' is an amazing and beautiful moment within the performance every single night, but it's definitely not the situation that I was warned of, potentially. People used to tell me horror stories: 'Aren't you concerned about' exactly what you described? And they gave me the example of… If you remember back in the '80s, there was a band called EXTREME; they had a song called 'More Than Words'. For instance, they played Australia, and 'More Than Words' was the huge hit, and everybody came to see the band and they were expecting an entire set like that, and had a pretty shocking surprise when the rest of it was 'hair metal,' essentially. But we haven't gotten that at all. And I think that that's a wonderful, wonderful thing."

"The Sound Of Silence" was certified platinum last June for sales or downloads of more than one million copies, while "Immortalized" hit gold in September for 500,000 copies sold.