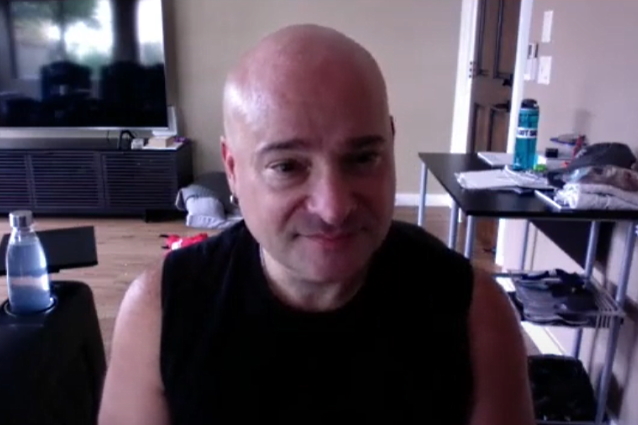 David Draiman of DISTURBED, which recently played its first pandemic-era shows, spoke to Meltdown of Detroit's WRIF radio station about the progress of the songwriting sessions for the band's follow-up to 2018's "Evolution" album. He said (as transcribed by BLABBERMOUTH.NET): "We spent the past week [or] two coming up with some pretty amazing new DISTURBED material that we are very, very excited about. There's nothing like playing live to inspire you, and it definitely seemed like it broke the seal. And now we're all guns blazing. We're very, very excited."

As for how far into the songwriting process DISTURBED has come at this point, Draiman, who resides in Hawaii with his wife and their son, said: "We have about six to eight skeletal song structures and ideas. So, like progressions and melodies. No actual definitive lyrics finalized yet. It's very much in infancy. But we can already tell from the combination of riffs and melodies and rhythms that a bunch of these ideas are just as good [as] or better than anything we've done. It's right in the zone of traditional DISTURBED — it's rhythmic, powerful, syncopated, anthemic. It's exactly what we were kind of thirsting for."

According to Draiman, he and his bandmates talked about doing some writing during the pandemic but ultimately wanted to wait until they could come together as a group and hash ideas out in person.

"Everybody had their own basket of wonderful stuff to deal with during the past couple of years," he explained. "I think that we needed to spend more time focusing on our families for ourselves during that particular period of time. We didn't have a whole lot of ability to come together as a band to create; there was just too much going on in everybody's respective situation. So now that the smoke is clearing and things are starting to crawl back toward some sense of normalcy together with, again, re-embracing the live experience, it's very refreshing. And we couldn't be more inspired."

In October 2020, Draiman told "Loudwire Nights" that DISTURBED's new music would be "blisteringly angry" and added that he was "dying" to sink his teeth into "new, original, angry, ferocious, brutal material."

Four months earlier, Draiman told Download Festival TV that he has spent some of his downtime during the coronavirus pandemic "having conversations with the other guys in DISTURBED about getting some new material going, and we've got some stuff in its infancy. One song, definitely, that's killer in our back pocket; we just haven't tracked it," he said. "And we've got a few more song ideas, [but] nothing that's been hashed out enough."

Draiman went on to say that making music over the Internet had presented its own set of problems, especially since most of DISTURBED's last couple of albums were composed with the core members in a room together bouncing ideas off each other.

"We kind of need to get back into the rhythm of being able to do stuff like this in Zoom format or online as opposed to in person," he said at the time. "At least it's some kind of real-time connection so that you can be creating together improvisationally to an extent, but there's still issues with audio — it's not as clear as you want it sometimes, there's too much compression and you lose level; it's a challenge — and the vibe isn't there. There's nothing that replaces you being in front of your co-songwriter and being able to feed off each other's energy and create in person."

DISTURBED performed live for the first time in nearly two years on September 25 as one of the headliners of the Louder Than Life festival in Louisville, Kentucky.