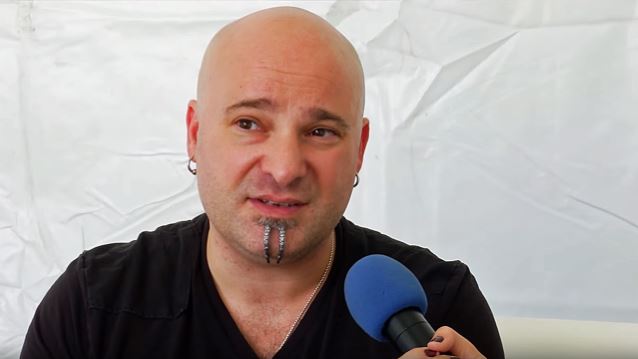 DISTURBED frontman David Draiman was interviewed by Excess Baggage prior to the band's October 15 performance at Knotfest Mexico at the Ford Pegaso in Toluca. You can now watch the chat below.

Asked which songs in DISTURBED's catalog best define the band in 2016, Draiman said: "That's the wonderful thing about where we've come to at this point in our career is that DISTURBED almost can't be defined anymore. Once you have a track like [a cover version of SIMON & GARFUNKEL's] 'The Sound Of Silence' come out and for it to be so stylistically different from what people normally accept from you, or what they're used to getting from you, I think that the limitations are gone."

He continued: "We typically are known for powerful, rhythmic, driving, melodic music, but you can achieve power in different ways and I think that we've kind of gotten to the point of our career where we don't really have to worry about those stylistic limitations anymore. I mean, don't get me wrong — it's not like all of a sudden we're gonna be an exclusive ballad band or anything like that, but I think that the doors are completely open as far as creativity is concerned."

Draiman recently said that DISTURBED has been surprised by the huge commercial success of its cover of "The Sound Of Silence". He said: "It keeps on spreading to parts of the world that either we've never been to or that are just discovering it. The track is, as of yesterday, No. 2 on the iTunes Top 100 in Germany, it's No. 3 in Luxembourg, it's No. 1 in Slovenia. I mean, some places that we've literally… I've never been to Slovenia before. So it's pretty amazing to see how many people have been embracing it and how widely it's been embraced."