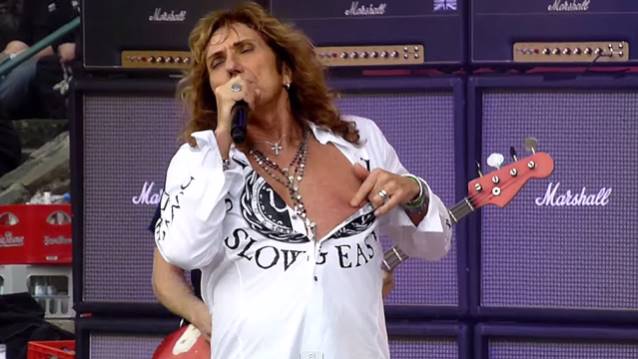 Former DEEP PURPLE and current WHITESNAKE frontman David Coverdale's home in Lake Tahoe, Nevada was once again invaded by a black bear this past weekend. "It must have weighed 450-500 pounds," Coverdale tells Classic Rock. "It took out two armed screens, opened the fridge, ate his fill, then took a HUGE poop. I came upstairs and interrupted him. I shouted like crazy as I couldn't find my air horns. Thank God, he remembered where he entered."

He continued: I quickly looked around as I saw the mess and couldn't see where he gained access, then he headed for some sliding doors that we leave open when it's hot. They're only open five or six inches, and we have ' bear poles' that prevent anyone or thing opening them. But I saw with my own eyes the creature rear up on its hind legs and squeeze out, taking an antique Tiffany lamp out as it escaped. Heartbreaking."

This is not the first time Coverdale has been confronted by a black bear at his home. His first face-to-face encounter with a bear came in July 2007, as he was "rinsing a cup or two at the kitchen sink." He stated at the time: "I don't mind telling you I almost succumbed to an involuntary bowel movement."

In 2007, The New York Times reported that the Lake Tahoe area was experiencing a rise in home invasions by bears. It was estimated at the time that there were five bear break-ins around Lake Tahoe every night, with some believing that the actual number was twice that.

There are 250 to 500 bears around Tahoe. The animals, which can weigh as much as 400 pounds, have become less wary of humans after years of being fed and access to unsecured garbage.

This is where he/she gained access. Poor ol' Tiffany lamp is a goner...:( Interesting start to the week. Ha Ha!! pic.twitter.com/W4DZRMRV9J