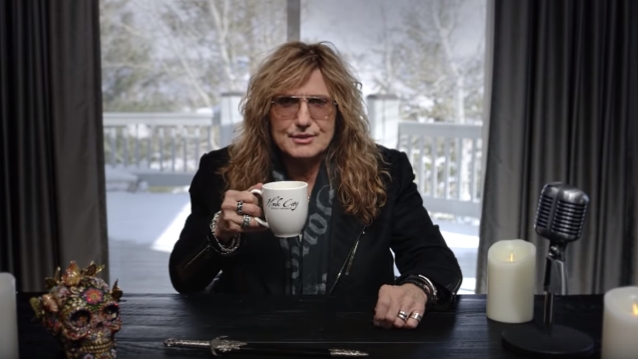 WHITESNAKE frontman David Coverdale has told the Rock 100.5 WNNX radio station that he is no longer allowed to discuss the possibility of retirement. "My wife has ordered me to stop using that word, because it comes back to haunt me every time," he said (hear audio below). I've retired more times than Frank Sinatra. So I'm just gonna go until my body goes… Actually, my body was telling me in 2016… I didn't go public until recently that I'd been suffering, in my knees, for about 10 years with degenerative arthritis.

"When I see people have trouble getting up out of a chair in a restaurant or in the street, just my heart aches for them immediately, because it was miserable for me," Coverdale admitted. "And, basically, for 10 years, we'd been covering it up with shots, injections and stuff for tours, pain-killing ointments, and I was fine on stage until I had some shots in South America, and they were hurting me through the show. Now, when I go on stage, I go into the zone. I don't know what the hell I'm doing. My job is just to have fun with the audience and encourage them to have fun. I totally trust my band to kick ass, 'cause that's the driving force behind me, and the energy from the crowd, which is an intense power crowds have, how the evening's gonna go, and channel that energy back to them — constant refueling from the audience and sending it back. But to be pulled out of the zone by insane bone-on-bone pain was 'ouch.' And that happened in South America. And, fortunately, it was near the end of my tour cycle. There was no question — had I not gone in to have knee replacement surgery for both knees, I would have certainly been in a wheelchair, and I could not see myself within that picture."

According to Coverdale, WHITESNAKE's 2018 tour with FOREIGNER and JASON BONHAM'S LED ZEPPELIN EVENING was the "perfect opportunity" for him to "test drive" his new knees.

"I didn't have the courage to say, 'Let's book a world tour,' 'cause I had no idea how my knees were gonna be," he said. "I was doing physical therapy for over a year every day of the week to rebuild strength and stamina. And I'm just not the kind of performer who just stands there and sings. I have to work that stage and interact with the audience and my musicians. I went in to see my surgeon. I said, 'I'm gonna go out for two months.' He said, 'No. I never thought you'd do it till next year' — till this year, 2019. I said, 'It's only an hour [on stage].' And he said, 'Whatever you do, don't do any bending and rotating.' And I went, 'Christ, that's what I do.' [Laughs] I'm a singer, bender and rotator, for God's sakes."

Thankfully, Coverdale's new knees "worked amazing," which gave him the confidence to call his agents in London and talk to them about booking more tours.

"A lot of the stuff that I've been through in my life other people experienced," David said. "'Cause I'm certainly not unique as a human being. When I had back surgery, back in the 'Slip Of The Tongue' days — in the late '80s, early '90s — and I had to have surgery, I lost an inch and a half in height. I herniated… at the lowest vertebrae, at the bottom of the spine. It had just ground into powder, so I had to go in for surgery. And me then going back out and flinging mic stands all over the stage was incredibly inspiring to people who'd had to go in for three or four back surgeries… So this is a good example to say, 'Look, I'm 67. I'm kicking ass with two new knees. Come and join me, you guys.'"

WHITESNAKE's new studio album, "Flesh & Blood", will be released on May 10 via Frontiers Music Srl. The disc follows the 2011 critically acclaimed album "Forevermore" and 2015's "The Purple Album", a reimagining of DEEP PURPLE classics from Coverdale's time in that band.