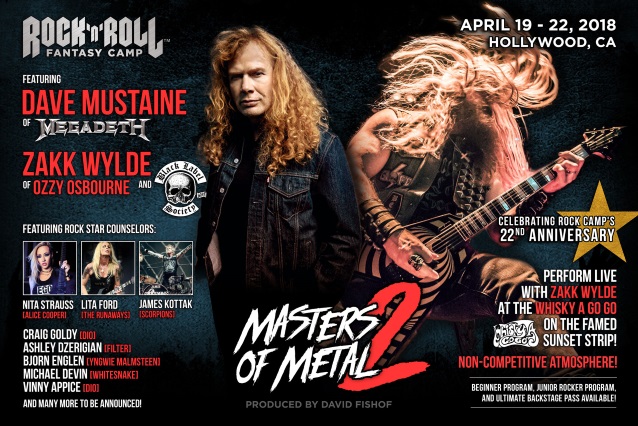 Celebrate some of the hardest and heaviest metal songs of all time as Rock 'N' Roll Fantasy Camp announces its upcoming camp featuring Dave Mustaine of MEGADETH and Zakk Wylde of OZZY OSBOURNE and BLACK LABEL SOCIETY, set to take place April 19-22, 2018 in Los Angeles, California.

Says Mustaine: "Attention! Rock 'N' Roll Fantasy Camp has been seized by myself and Zakk Wylde and is now the Metal Fantasy Camp April 19-22, 2018. Prepare to shred songs with me like 'Holy Wars' and 'Dystopia', and metal anthems like 'Symphony Of Destruction'. You've been warned!"

Join Mustaine and Wylde plus 15 incredible touring rock star counselors, including bass players, guitar players, vocalists and drummers as you live the ultimate metal dream! You'll be jamming with Mustaine and Wylde at the private Rock 'N' Roll Fantasy Camp facility and then performing live on stage with Wylde at the infamous Whisky A Go Go on the Sunset Strip in Hollywood, California on Sunday April 22, 2018.

Spend four days immersed in metal as you jam such hits as "Symphony Of Destruction", "Peace Sells", "Crazy Train" and "I Don't Know" with these two metal legends at Rock 'N' Roll Fantasy Camp .

Over the course of four music-filled days, campers will be placed into bands led by rock star counselors including Lita Ford, Nita Strauss (ALICE COOPER), James Kottak (SCORPIONS) and many more. Musicians will hone their stage presence, learn to play some of rock music's greatest anthems, get tips on playing as a band and hear stories of life on the road from their rock star counselors. Attendees will also attend master classes and jams rooms with these renowned musicians and then perform live with their band in front of a packed house at the Whisky A Go Go with Zakk.

Also available is The Ultimate Backstage Pass fan package-for the non-musician man or woman who always wanted to come to Rock 'N' Roll Fantasy Camp! Attendees will participate in the question-and-answer sessions and watch the amazing jams and performances with all the amazing headliners along with the incredible rock star counselors. Attend master classes; attend the opening night party and all-star counselor jam as well as the live performances at Lucky Strike and the Whisky A Go Go on the legendary Sunset Strip plus much more!