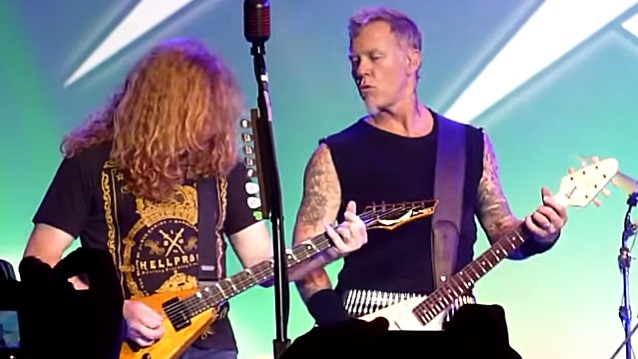 Hetfield took up piano at the age of nine and began playing guitar at 14. He was in bands called LEATHER CHARM and OBSESSION during his teen years. In October 1981 he answered a classified ad placed in a local paper called Recycler by Danish drummer Lars Ulrich, and METALLICA was born.

Hetfield told The Pulse Of Radio he still recalls the group's first gig, with original lead guitarist Dave Mustaine. "First METALLICA show was at Radio City in Anaheim. I remember the first song we played, Dave broke a string, and I was stranded up there. I was just singing, I wasn't playing guitar back then, and I was so uncomfortable, I was like, 'So, how's it going...' There were about 200 people. You know, your first gig, everyone shows up. Second gig, there's about 20, you know. [laughs]"

Hetfield told The Pulse Of Radio how the scene in San Francisco at the time exploded thanks to METALLICA's success. "Well, I recall on the (1984) 'Ride The Lightning' tour, after coming back, coming back home and feeling like the scene has grown so big. And, you know, we came back, we had our 'Ride The Lightning' shirts and things are kind of going good for us, 'Yeah, we just went on our second tour,' and we come back and the scene has gotten so much bigger."

Weathering the death of Cliff Burton in a tour bus accident in 1986, METALLICA became bigger and bigger, scoring their first gold album with 1986's "Master Of Puppets" and their first platinum disc with 1988's "…And Justice For All". The group became superstars in 1991 with the release of the self-titled "black album," which has sold over 15 million copies to become the biggest selling album of the SoundScan era of sales tracking.

He recalled the moment when he made the decision to get help for his problems with drugs and alcohol. "My wife threw me out of the house and I went to rehearsal, and she could not believe that I had done that, and said, 'You've got to check yourself in somewhere,' and I said, 'Nah, no way, I'm the singer for METALLICA, I can't get help. I don't need help,'" he said. "A lot of denial. She was very adamant about me seeking the help and I went in, I think, for her and for my family."

Hetfield told The Pulse Of Radio at the time that he was okay with people seeing that side of his life. "Connecting with people has never been easy for me. I think the more that people know about me and my struggles, the easier it will be to connect with people. I've put myself out there, and if they choose to stomp on my heart, or to embrace it, that is up to them."

While "St. Anger" received a mixed reaction from fans, the band came back full force with 2008's "Death Magnetic". Hetfield told The Pulse Of Radio at the time that having gone through all its turmoil, METALLICA was stronger than ever. "You know, 'St. Anger', the 'Monster' movie, all the stuff that we went through — once we got back together and started playing again, we knew that we were given some sort of gift to continue and not fall like many other bands have. So we've got to take care of this, and we're doing our extra best to do that."

Hetfield and the band are staying, touring constantly, releasing a movie called "Metallica Through The Never" late last year, and getting to work on a new studio album for release in 2015. Hetfield told The Pulse Of Radio a while back that he's never had to worry about coming up with material. "I can't turn off the creative part of me, which is — what a great gift," he said. "There's stuff coming out all the time, whether it's in the tuning room, in my hotel room, sitting at home with the acoustic, wherever. The stuff is coming out, and it gets recorded or written down or something, some way, and it'll come out at some point. Whether it's on this album, the next album, who knows."