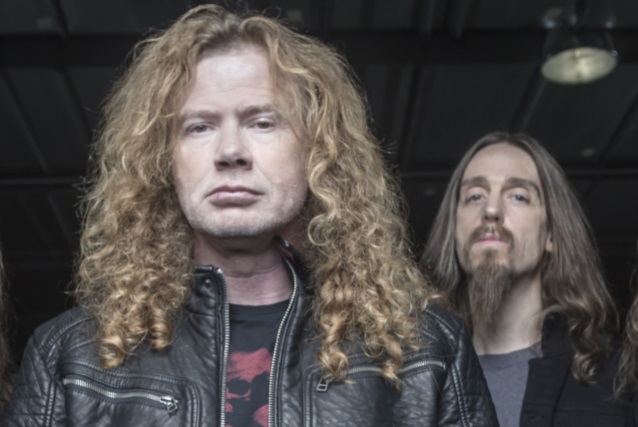 MEGADETH leader Dave Mustaine was interviewed by the RQP 104.3 FM radio station when the band played in Buenos Aires, Argentina earlier this month. You can now watch the chat below.

Asked how MEGADETH goes about the process of choosing a new drummer, Mustaine said: "It's very difficult. The drumming is the hardest part in the band, because you need to be really physically fit every night — every night, no matter what. You can't be sick. And I think that drumming is a thankless position. A lot of times, the drummers go without being recognized for how hard their job is. Consequently, you get drummers that have bad attitudes after a while. It's hard to be around them, because a lot of drummers don't get the recognition they deserve, and they get bitter. For us, we've been really lucky with the last two drummers we had — with Chris [Adler] and with Dirk [Verbeuren]. And even the guy before Chris, Shawn [Drover], was an easy-going kind of guy. But it's not always like that. And Chris helped us find Dirk. Dirk is a lot like [late MEGADETH drummer] Gar Samuelson, which is really refreshing, because that's how this whole thing started. I was playing jazz-metal-type riffs, because I didn't wanna sound like my last band [METALLICA]. I wrote that shit, I can write whatever I want, so I knew what not to do, so I did something different, and that's how MEGADETH was born. I wanted to do something a little bit different, and I needed a different kind of drummer to do that."

The 42-year-old Belgian-born-and-now-Los-Angeles-based Verbeuren had been playing with SOILWORK for more than a decade before being recommended for the MEGADETH gig by Adler, who called Dirk "probably [one of the] top three drummers in the world."

Verbeuren told All About The Rock about learning MEGADETH's material for a live performance: "The current live set is based on 'Dystopia' and the early albums, from Gar Samuelson to Nick Menza. These guys really had their own style. Nick was actually one of my influences as a young drummer.

"I had ten days to study eighteen songs. I tried to capture the intention behind the drum parts in order to respect the band's vision. Gar and Nick have a more old-school swing whereas Chris Adler's approach is more contemporary. I stay true to the originals while injecting some of my own groove and flair. Chris was very helpful in guiding me as to what the band would expect from me, which is super cool of him. It made the rehearsal and first shows a lot easier."

In interview with the KATT Rock 100.5 FM radio station, Mustaine described Dirk as "is one of the most pleasant, easy-to-get-along-with guys I've ever met in my life. I'll walk up to him and he'll smile and lean forward and pat me on the back. He goes [adopts thin accent], 'How's it going, buddy?' I could say, 'Oh, man…'… anything. 'Oh, okay, buddy.' [He] smiles and pats me, 'cause he's just a happy guy. I've never, ever, ever seen him not smile."