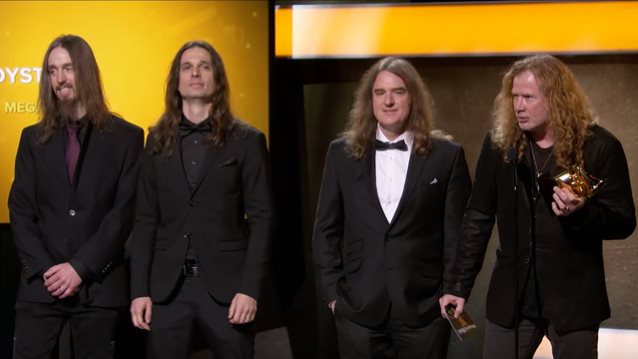 When MEGADETH was honored with its first-ever Grammy last Sunday night (February 12), the band's walk up to the stage was inexplicably accompanied by the sound of the house ensemble playing the song "Master Of Puppets" from MEGADETH mainman Dave Mustaine's former band METALLICA.

He continued: "I didn't mind them playing it at all, it's a house band, and they're doing cover songs. They were probably saying, 'We don't know any MEGADETH songs. How about if we do a METALLICA song?' But when I went back and listened to it, I was, like, 'Oh my God! That's the worst version of 'Master Of Puppets' I've ever heard in my life!'"

When the interviewer pointed out to Mustaine that the house "house band seemed to be playing pretty random songs," Mustaine agreed: "They could've done a Cyndi Lauper song! [Laughs] I was just happy to be up there. It's about being recognized."

He added: "We all want so badly, when we pick our careers as kids, to be the best at what we do, and when you choose to be a musician, the stakes are much different. The way they 'grade' us, the way they hold us in esteem, how you tell who is better than who."

He added: "We just recently got this CLIO Award for creative marketing [for the 'Dystopia' Virtual Reality Experience], and there's another award called the Genesis Awards from the Humane Society Of The United States and they presented us with the Doris Day Award [for producing work which raises public awareness of animal issues]. We've got some awards that other bands will never get!"