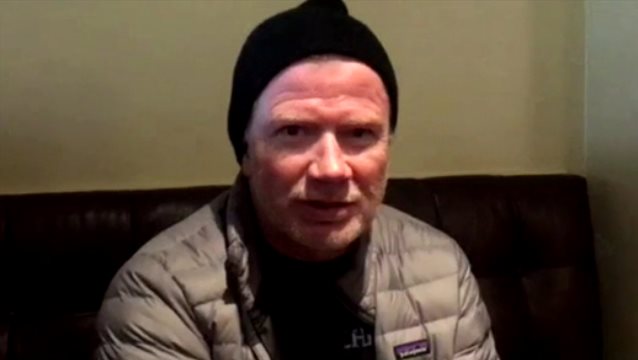 Dave Mustaine says that he "didn't care" that the house band played the song "Master Of Puppets" from his former band METALLICA when MEGADETH was honored with its first-ever Grammy on February 12.

MEGADETH was nominated for a 2017 Grammy Award for "Best Metal Performance" for the title track of "Dystopia". This marked the band's twelfth Grammy nomination in this category (including nominations in the discontinued "Best Hard Rock/Metal Performance" category).

Asked by Grammy.com what it was like winning his first award, Mustaine said: "It was really exciting. We were all sitting in a row, and when Margaret Cho [one of the pre-telecast hosts] had said, 'Dystopia', we were all ready to hear 'M_' [for MEGADETH], and she went 'D_' [for 'Dystopia'], and I think it kind of faked all of us out for a little while. And then after she said 'Dystopia' and said 'MEGADETH' really loud, I was, like, 'Oh my God! We got it.' So I remember standing up and being pretty excited."

He continued: "It was a long way from our seat to the stage, and a lot of people are making a big deal about the house band playing a METALLICA song. I don't care. I didn't care at all. It was about the award. I thought winning the award was great."

Mustaine added: "I wish that there would have been more time so that the [other] guys [in MEGADETH] could have had something to say too, but I know they're all gonna get their chance to say whatever they wanna say about winning the award."

He continued: "I didn't mind them playing it at all, it's a house band, and they're doing cover songs. They were probably saying, 'We don't know any MEGADETH songs. How about if we do a METALLICA song?' But when I went back and listened to it, I was, like, 'Oh my God! That's the worst version of 'Master Of Puppets' I've ever heard in my life!'"

When the interviewer pointed out to Mustaine that the house "house band seemed to be playing pretty random songs," Mustaine agreed: "They could've done a Cyndi Lauper song! [Laughs] I was just happy to be up there. It's about being recognized."