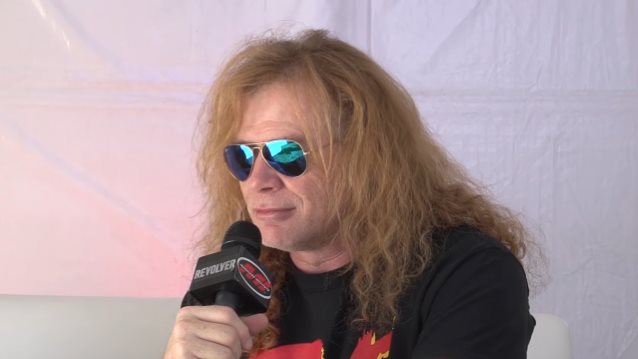 Revolver editor Sammi Chichester conducted an interview with MEGADETH mainman Dave Mustaine at the two-day Ozzfest Meets Knotfest event, which took place September 24-25 at San Manuel Amphitheater And Festival Grounds in San Bernardino, California. You can now watch the chat below. Asked to recall the first time he heard BLACK SABBATH's music, Mustaine said: "Yeah. It's gonna be a little bit X-rated — not perversion-wise, but more along the lines of explicit drugs. I was 13, going to high school, and the guy that lived in my apartment building, his name was Alfie… I may have the age off by a little teeny bit… But he was selling commercial pot; [it was] fifty cents a joint. So we would go to his house, buy some joints, smoke pot, and then listen to BLACK SABBATH. And his room, all the windows were blacked out and he had those fuzzy blacklight posters. So we would sit in there and listen to SABBATH forever. And it was a huge part of my growing up — not so much influencing me as a guitar player, but I loved the music."

Mustaine also recalled a couple of instances where he got to spend time with members of BLACK SABBATH. He said: "I remember participating in a golf tournament with Frank Sinatra, and I got a golf club from the event. And I knew that Ozzy [Osbourne] was a big Frank Sinatra fan, so I gave him that golf club, and he hugged me. And everyone freaked out, because he did that. And apparently, if Ozzy hugs you, you're in the family forever, which is great. Also, when we were in South America, Tony [Iommi] and I spent some time exercising after he was in his… convalescing from his treatment, he was doing a lot of walking and stuff like that, and he asked me if I wanted to go with him for one of the days to go walk and talk. And it was really life-changing for me, because he's such an icon to all of us. And again, although it's not really that much of an influence guitar-playing-wise, musically, I loved his music and I love him as a person. He's just a very wonderful human being. And it was cool too, because we weren't out bonging or slamming beers or looking at chicks and stuff like that — it was two guys who had a mutual respect for one another walking around a beautiful lake in South America and just talking about life."

MEGADETH will next perform at the Revolver Music Awards on Tuesday, December 13 at Webster Hall in New York City.