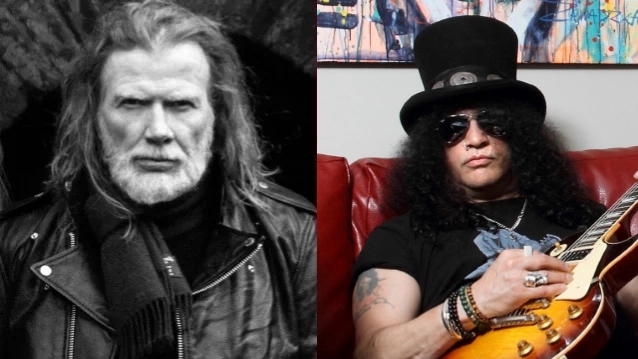 MEGADETH mainman Dave Mustaine spoke to the "Appetite For Distortion" podcast about how GUNS N' ROSES guitarist Slash ended up writing the foreword to Mustaine's new book, "Rust In Peace: The Inside Story Of The Megadeth Masterpiece". Released on September 8 via Hachette Books, the book details the making of MEGADETH's iconic record "Rust In Peace".

Mustaine said (hear audio below): "I think anybody would have wanted to have Slash write [the foreword]. But the thing is that actually was part of an interview that he did with somebody else and who was part of our team. They said that 'it was just a really great thing that Slash had been talking about you,' and, 'Why don't you use that?' And when I read it, I was just gloating; it was just great. It's great to have people say nice stuff about you like that, but guys that you really look up to. Not just because they're successful — because I'm successful too — but we were close; we spent a lot of time together [in the 1980s]. David [Ellefson, MEGADETH bassist] spent more time with Slash than I did, but I think that we had that guitar player bond."

In his autobiography, Slash wrote about spending time with Dave when the two were living in the same part of Los Angeles. "We became friends; he was strung out on smack and crack and he lived in the same neighborhood, so we hung out and wrote songs," Slash said. "He was a true, complete fucking maniac and a genius riff writer. We'd hang out, smoke crack, and come up with MAJOR heavy metal riffs, just fucking dark and heavy as hell. Sometimes Dave Ellefson would join us; we got along great, we wrote some great shit. It got to the point, in our drug-fueled creative zone, that we started seriously entertaining the idea of me joining MEGADETH."

He added: "Dave Mustaine is still one of the most genius musicians I have ever jammed with, but still, in my heart of hearts, I knew I couldn't leave GUNS."

Asked in a 2018 interview with Loudwire if there is any potential for a future collaboration between him and Mustaine, Slash said: "I don't see myself guesting on a MEGADETH song. I don't think it would work in the context of what MEGADETH does. But maybe Dave on one of my things — I don't know."

Mustaine later disagreed, telling the same site: "Slash is a terrific talent and I disagree wholeheartedly with what he said: that he couldn't play on a MEGADETH record. He's a brilliant guitar player."

Mustaine also revealed that some of that material he and Slash jammed on in the 1980s actually ended up on "Rust In Peace".

"When we played together, I seem to remember that there were couple riffs that showed up around the 'Rust In Peace' period that he and I were noodling around on," he said. "That's when all this went down: during the 'Rust In Peace' era. Might be why [Slash] says that he can't do it, but he certainly can. He makes it look effortless, and it makes me mad. It just looks like water running over a smooth stone; it's just perfect. He's done this every day of his life, and he was made for the exact moment to stand on that stage and play that solo and have all those thousands and thousands of eyes focused on him."