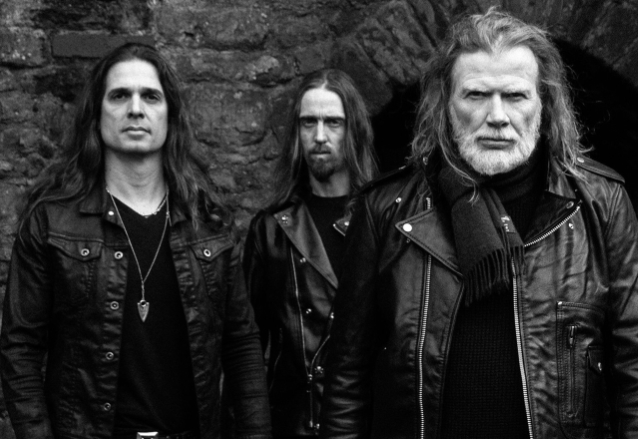 MEGADETH's new album, "The Sick, The Dying And The Dead" has been mastered and is "super close" to being released.

Addressing a fan named Louie who is a budding bassist and saxophone player, Dave said (as transcribed by BLABBERMOUTH.NET): "We're super close to having 'The Sick, The Dying And The Dead' out. We've been mixing and mastering it, and the mastering was done yesterday. So now it's off to the label, and pretty soon it's gonna be in your very talented hands."

In a recent interview with American Songwriter magazine, Mustaine said that "The Sick, The Dying And The Dead" would be released in the spring of 2022. The 60-year-old musician also said the LP's title track is about the plague, but not solely centered around the current pandemic. A broader, more historical scope of the diseases that have plagued humankind throughout time, "The Sick The Dying And The Dead" covers the current virus, swine flu, and other epidemics from centuries past.

"The song itself was a historical journey of how the plague started and where it went, starting with rats on ships carrying the disease, coming ashore in Sicily," Mustaine said.

According to Mustaine, the music for "The Sick, The Dying And The Dead" was assembled from riffs and music he has had archived for years, some as far back as his teens. "A lot of the riffs have been saved over time," he said. "A brand new song can be made up of something I wrote when I was 15 or 55. If It's a good riff, I'll save it."

Mustaine added that guitarist Kiko Loureiro and drummer Dirk Verbeuren were both involved in piecing together the songs on the album, which was recorded mostly in Nashville, with Loureiro working on his parts from his home in Finland.

Ellefson was fired from MEGADETH after sexually tinged messages and explicit video footage involving the bassist were posted on Twitter. At the time, Ellefson was accused of grooming an underage girl through videos and online messages. David has denied the allegation and has repeatedly said the woman in question had been a willing, consenting adult at the time of their virtual sexual encounter. Ellefson accompanied his denial with an alleged screenshot of a statement from the woman with whom he was supposedly involved at the time. In it, the woman admitted to recording the alleged intimate communications she had with Ellefson and called herself "naïve" for sharing them with a friend without the musician's permission.

MEGADETH recently completed "The Metal Tour Of The Year" with LAMB OF GOD, TRIVIUM and HATEBREED.

For "The Metal Tour Of The Year", MEGADETH was rejoined by bassist James LoMenzo for the first time in nearly 12 years.

LoMenzo joined MEGADETH in 2006 and appeared on two of the group's studio albums, 2007's "United Abominations" and 2009's "Endgame". He was fired from the band in 2010 and replaced with a returning Ellefson.