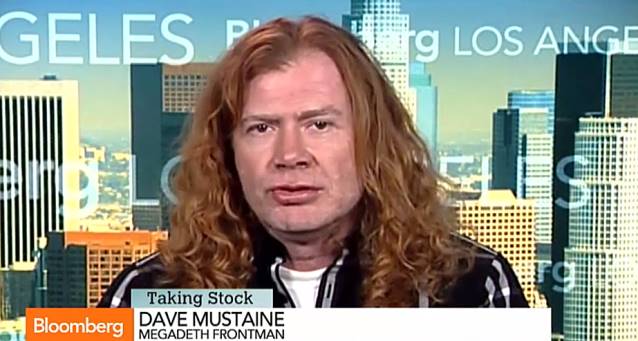 Earlier today (Wednesday, March 12), MEGADETH mainman Dave Mustaine reflected on his career, musical influences and how the band got started with Pimm Fox on Bloomberg Television's "Taking Stock". You can now watch the segment below. A couple of excerpts follow (transcribed by BLABBERMOUTH.NET).

On his upcoming performance with the San Diego Symphony:

Mustaine: "Well, the symphony music, with classical music, I believe, shows up a lot in heavy metal music. A lot of the medieval-type music that I was brought up with, and the British Invasion… LED ZEPPELIN, for example, has a lot of the story telling and the classical arrangements do tell a lot of stories. And I also was weaned on THE BEATLES, so a lot of Sir George Martin's arrangements with the strings and stuff really fascinated me. So I've always been a fan of classical music. But the classical industry is dying. There's a generation of people that don't really know about it. I thought it would be really cool to take my guitar in there and play the lead-violin part with a little bit of some snarl, a little bit of some distortion. And, you know, watching all the Disney movies when I was a kid, I liked the songs right before the poison apple gets bit, or the wolf is about to attack or something, where the music gets kind of scary. So we picked some songs that we thought were really emotional, colorful songs — some Vivaldi, some Bach."

On whether he has become less intimidating in terms of his music as he's developed:

Mustaine: "I think as you grow up, things kind of change. It's kind of hard being an anarchist when you have a Mercedes-Benz in your driveway. This morning, I was thinking about growing up, how I was homeless when I started my career. I was a product of a broken family and was, basically, watched during the day by the Boys Club Of America. And, you know, it's one of those things where you go from being a poor kid, having lunch tickets and food stamps, to being a millionaire. It's an American success story."

On some of the biggest challenges that new bands face in today's music world:

Mustaine: "The revenue streams have dried up. The money that you would generate from record sales has all but vanished. So in order to be successful and to keep yourself in business, you have to find other ways to pay your bills, which predominantly are touring and merchandise. A lot of people have endorsements and sponsorship deals and stuff like that too, but because of peer-to-peer file transferring and stuff like that — it's old news now — it's really changed the music industry."