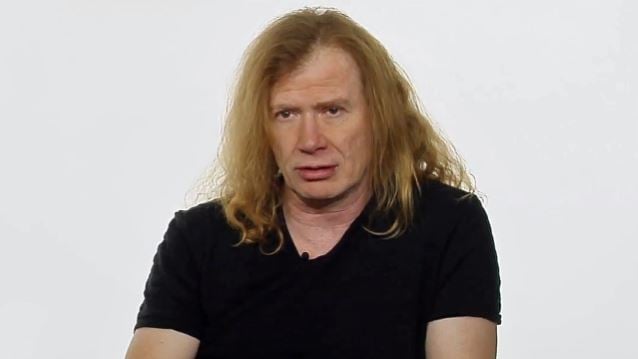 MEGADETH mainman Dave Mustaine says that he has no intention of voting for Hillary Clinton in the upcoming U.S. presidential election.

Asked by a fan on Periscope if he is a fan of controversial Republican presidential nominee Donald Trump, Mustaine replied: "Am I a Donald Trump fan? Well, he's a very successful businessman. Am I gonna vote for him? That's none of your business. And if I did, I wouldn't tell you. If I didn't, I wouldn't tell you. I can tell you one thing: I am not voting for [presumptive Democratic presidential nominee] Hillary [Clinton]. I am voting for [MEGADETH mascot] Vic Rattlehead."

Mustaine also commented on the recent surge in high-profile violence around the world and the fact that we are regularly waking to the news that somewhere in the world, and sometimes close to home, someone has been slaughtered in what looks like an epidemic of terror.

"I just saw my buddy Vernon Reid from LIVING COLOUR posted something about a knife attack in Japan. Nineteen people dead," Mustaine said. "And, of course, some asshole had to say something about guns right away.

"The world is so full of hate right now. There's a lot of love. I mean, I have love in my heart for you guys, even when you pick on the band and me. I can take it. It's kind of sad when you do it to people like [Dave's MEGADETH bandmates] Kiko [Loureiro] or Dirk [Verbeuren] or David [Ellefson], 'cause they don't deserve any of that shit."

Mustaine appeared willing to accept some of the responsibility for the negativity that has occasionally surrounded MEGADETH over the years, explaining: "I know that my mouth sometimes gets me in trouble. I'm trying to really get a grip on that. I look at people like [late boxing legend] Muhammad Ali, who was really controversial in his early life and he turned around to such an amazing, amazing ambassador for professional sports. And also, he was a very, very loving Muslim person. In the beginning of his career, a lot of people were mad about that and the way he conducted himself. People accepted it and pretty soon it was not the way he was defined; he was defined by his actions, not by any label of faith or race or gender or sexual orientation.

"I truly wish that… I hope that that's how I'll be remembered — as somebody who may have had a bad start, but finished really well."

He then thanked his fans directly, saying: "I've gotta tell you, I'm so grateful for you guys giving me so many chances when most people that do the stuff that I've done in the past, they don't always get another chance."