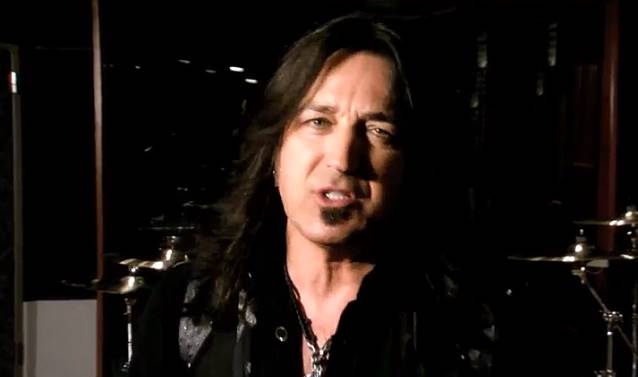 "Sympathy", the new video from Christian hard rockers STRYPER, can be seen below (courtesy of USAToday.com). The song comes off the band's new album, "No More Hell To Pay", which will be released on November 5 in North America via Frontiers Records. The effort will be made available in two formats — standard CD and deluxe digipak featuring exclusive video content. Produced by STRYPER guitarist/vocalist Michael Sweet himself, the set features some of STRYPER's strongest and heaviest material ever.

Regarding the decision to film a video for "Sympathy", Sweet tells BLABBERMOUTH.NET: "I sent [MEGADETH mainman Dave Mustaine] the record and he picked 'Sympathy' as his favorite song on the record. We went with his lead (I respect Dave as artist and friend) and wound up making a video for the song.

"The video was filmed in Las Vegas at the same time/day we shot the [video for the title track of] 'No More Hell To Pay', as well as a 20-minute documentary, available on the CD/DVD deluxe version of the new album.

Mustaine previously wrote a blurb/quote for Michael Sweet's forthcoming autobiography, "Honestly", which is expected next year. Dave wrote: "Sometimes you see someone or something and you think you got it all figured out, just to find you were pretty far off base. That's a sucky feeling. I learned a long time ago not to judge a book by its cover, and as much as I used to think that I am nothing like Michael Sweet, I have come to realize that we both have had a lot of hardships in common; the same trials and tribulations, the same band problems, and some of the same relationship issues. Fortunately for us, we both believe in the same Jesus, and serve the same amazing, loving creator, so it's no wonder that we would both be standing on the same victorious side of life, once all the smoke clears at the end of the fight. I hope you will enjoy his memoirs and come to a new understanding and a new appreciation of Michael Sweet."