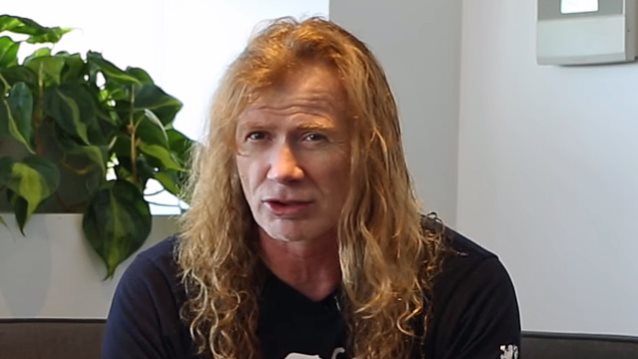 MEGADETH mainman Dave Mustaine recently spoke to Loudwire about the songwriting process for the band's new album, "Dystopia". You can now watch the chat below. A couple of excerpts follow.

On whether the lyrics for "Dystopia" came first, followed by the music, or the other way around:

Mustaine: "I usually write in different ways. When you look at songwriters, sometimes they'll have somebody that does the music and they'll have a collaborator that does the lyrics, like Elton John and Bernie Taupin. Elton John [comes up with] the music and Bernie [writes] the lyrics. And more often than not, the lyrics will be the last thing that happens. There's only been a couple of times where I've written the lyrics and the music at the same time. That happened on 'In My Darkest Hour' and it happened on 'Use The Man'. And unless my memory fails me, those are the only two that I remember doing [that way]. This record, I had ten songs written before I went into the studio with [drummer] Chris Adler. David Ellefson [bass] had come out to California — he still lives in Arizona — and he'd come out a couple of times to lay down some tracks while we were working, while we tried to do that 'Rust In Peace' reunion thing. He had laid down some tracks. And what we did at that point, those songs didn't even end up the same way; they're totally different. So there's no set formula."

On whether there were specific world events or incidents that influenced the lyrical themes covered on "Dystopia":

Mustaine: "I think you could dissect that question. Things going on in the world influence my lyrics, but it's not just right now, what's contemporary. It's something that has laid itself out and is the way of the world, and has been for a very long time. I like to watch the news. I love world history, especially American history. I like reading autobiographies of world leaders, great warriors and things like that. When you look at a lot of the lyrics on this record, it's not really that much different than any of the other records; it's just the climate. I've always written about politics, war, drugs, relationships, a little bit of the occult. I think dabbling in the occult, since I did get into that, it's a little bit more, like… I don't really wanna go there. As bittersweet as this is, heavy metal music is really popular and successful when the world is under a lot of stress. And society, when it starts to eat itself, I think a lot of people turn to more aggressive music. And I found that people, when they listen to music, they kind of gravitate more towards real lyrics instead of fantasy stuff. 'Cause I've always loved stuff like Ronnie James Dio's lyrics and so on and so forth. But with all of the mythology and the medieval stuff, to me, I can't really write from that position very much, so I tend to write more about current events."

Due on January 22, 2016, the follow-up to 2013's "Super Collider" was recorded last year in Nashville, Tennessee and was produced by MEGADETH mainman Dave Mustaine. The CD was mixed by Josh Wilbur, who has previously worked with LAMB OF GOD, ALL THAT REMAINS and GOJIRA.