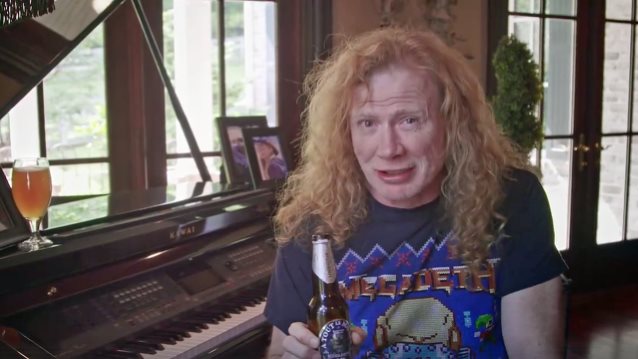 Dave Mustaine was recently interviewed by WMSC's "The Metal Teddy Bear Experience" radio show about À Tout Le Monde, a new beer from Unibroue born of the friendship between its brewmaster Jerry Vietz and the MEGADETH mainman. Named À Tout Le Monde as a nod to one of the band's songs and one of their biggest hits in Quebec, this beer recalls the consonance of Unibroue's flagship beer, La Fin du Monde.

Asked why he decided to name the beer À Tout Le Monde, Mustaine said (hear audio below): "I didn't name it that. We initially had a different name and started this process back before we had the lineup change [in MEGADETH; it had a different name ['Head Crusher'], and it was based around a song that I had written and had a little bit of some co-writing from a different songwriter, a different bandmember [former MEGADETH drummer Shawn Drover]. When we went and talked to these guys [Unibroue], them being a company from Quebec, they wanted to figure out a way that it would tie in with the French heritage up there, the French-Canadian heritage, and so on and so forth. Because every one of their beers is French titled and it has a backstory to it."

He continued: "'À Tout Le Monde' is one of the most successful American songs ever up in Canada with French lyrics. And my family on my dad's side had also journeyed through that part of Canada, through the French-Canadian side, down into Ohio, where they ended up residing, and our family grew from there. So we had a lot of relationship with that area. So when they said, 'You know, we want something French. How about we do À Tout Le Monde?' I thought, 'I don't know. Why did you pick that?' And he goes, 'Because 'à tout le monde' means 'everybody,' and we want everybody to try this beer.' And I was, like, 'Sold.'"

Mustaine also spoke in more detail about why a decision was made to scrap the beer's original name. He explained: "The funny thing was, the name that we had before, it was called Head Crusher, and I was thinking, 'I don't know, man… Head Crusher beer versus À Tout Le Monde…' Head Crusher kind of sounds like one of those things where you do the super-hot-hot sauce kind of stuff where it's, like, something really dumb like 'Crap Your Pants Hot Sauce' or something really dumb. I think [the name À Tout Le Monde] is better. It's more palatable. I think that the people that see it, it's a conversation piece on top of it. It carries on the French backstory to everything, and it's just such a beautiful song."

He added: "Plus, you know, when you think about it, we've had… Unfortunately, when you go to concerts, people sometimes will overdrink, and we've had a lot of unfortunate situations where people have gotten injured or even worse, lost their lives or the lives of their friends behind the wheel. And we didn't wanna make light of the whole thing with alcohol; we wanted to make sure that people drank responsibly, and that if they were gonna drink that they were drinking because they liked what they were drinking."

À Tout Le Monde is a 4.5% abv saison that takes its name from a track on MEGADETH's 1994 album "Youthanasia", and features the group's mascot Vic Rattlehead on the label. It's described as follows: "À Tout Le Monde ale is a flavorful Belgian-style dry-hopped golden saison with hoppy and spicy notes. Topped by an unctuous head, this beer will give fans a clean, fresh taste and a crisp dry finish inviting to take another sip."

À Tout Le Monde is now available in 12 oz. bottles (4 pack) at all Unibroue retailers in the United States, as well as on tap in several bars and restaurants.