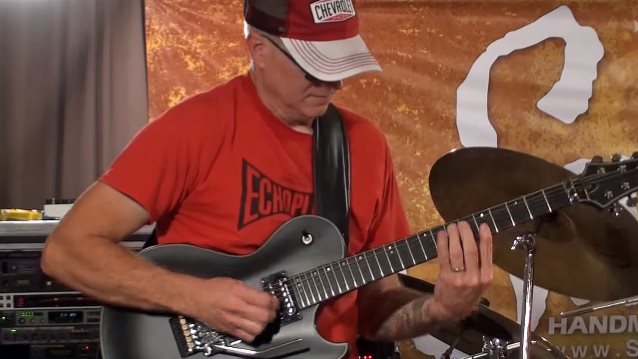 In an extensive 4,600-word feature by music journalist Joel Gausten regarding the 30th anniversary of MEGADETH's 1986 album, "Peace Sells… But Who's Buying?", former MEGADETH guitarist Chris Poland discusses a number of topics, including the recording of the album, his struggles with sobriety, his rocky relationship with MEGADETH leader Dave Mustaine, his post-MEGADETH stint playing bass for punk legends the CIRCLE JERKS, his work with late MEGADETH drummer Nick Menza (in the band OHM:) and his former band's feud with METALLICA. The feature also includes insight into late MEGADETH drummer Gar Samuelson's life after leaving the band, including an exclusive interview with Andy Freeman, former vocalist in Samuelson's 1990s band, FATAL OPERA. An excerpt from the feature follows below.

Set off by an iconic bass line written by Mustaine and performed by Ellefson, the album's title track remains one of MEGADETH's brightest moments — even if it was originally conceived as a very different song.

"'Peace Sells' was like an eight-minute song, and Gar refused," Poland recalled. "He said, 'No, man. This song's too good to draw it out like that. We've gotta make this song short and sweet.' He was right."

Looking back, Poland is ultimately pleased with how "Peace Sells…" came out.

"I really like all the songs; it was a real strong record, man," he said. "My only qualm was, I know we were playing a lot different style than METALLICA, but the production on 'Master Of Puppets' [released that previous March] was just so good that it just hurt every time I listened to it. Both records came out at the same time, and it was like, 'If we could have gotten that vibe and that sound with our production…' I'm not sure we could have, because you get what you get, you are what you are. The mic's on; it only records what you give it. Maybe we weren't sonically in the same cool space those guys were at the time, guitar-wise and recording technique-wise. I think honestly, 'Peace Sells…' and 'Master Of Puppets' are the two best records of that whole era."

Although METALLICA and MEGADETH were clearly leading the genre circa 1986, the two bands weren't exactly celebrating their achievements in the same room together. Poland recalls that considerable friction still existed between Mustaine and his former METALLICA bandmates at the time.

"I really didn't know any of those guys," he said. "Because of this whole feud, every time they were near me or whatever, I was just like, 'Well, I don't know. Should I go talk to them?' I really wanted to talk to [METALLICA frontman/guitarist James] Hetfield about tubes and tone and how you do this and that, but I just never did."

In September 1986, METALLICA bassist Cliff Burton was killed in a tour bus accident at the age of 24. Despite what was going on between Mustaine and his old band at the time, Burton's tragic passing was deeply felt within the MEGADETH camp.

"Dave took that so hard," Poland said. "That was really rough on him, because those guys drove to rehearsal together… He was out of it for days, just crying constantly."

On a much happier note, "Peace Sells..." succeeded in elevating MEGADETH to the next level. The album reached #76 on the U.S. Billboard chart (and was certified platinum six years after its release). Videos for "Peace Sells" and "Wake Up Dead" hit MTV, adding new headbangers to the band's expanding audience. MEGADETH's leap into the mainstream occurred during an era when most metal acts were regularly accused of" selling out" for doing far less. But Poland is adamant that MEGADETH maintained their integrity throughout the "Peace Sells…" era.

"We never sold out… I don't think MEGADETH sold out just because we went to bigger label; that's bullshit," he said. "Were we supposed to sleep on people's couches for the rest of our lives? Really, listen to 'Peace Sells...' That's a sellout record, huh?"

The compete "Peace Sells…" feature is available at www.joelgausten.com.