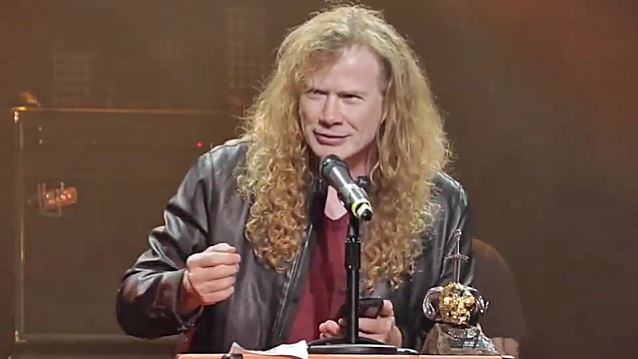 For the first time in the history of the Metal Hammer Golden Gods, an award recipient was named upfront of the night. The Golden God Award (sponsored by Orange Amplification) was presented to MEGADETH mainman Dave Mustaine Monday night (June 15) at IndigO2 in London. England.

Mustaine accepted the award from the event's host, ANTHRAX guitarist Scott Ian, who said: "I could tell you a lot of things abour Dave Mustaine, like I think the fact that he pretty much invented thrash metal is pretty much all I have to say. He's a fellow card-carrying member of the 'Big Four,' and he's been my friend since nineteen-eighty-fucking-two, or something like that."

In his acceptance speech, Mustaine said: "I made myself some notes today. I was talking with my management, and I have a knack for getting myself in trouble. So I made some notes of what I wasn't gonna say. I'm not gonna slag anybody. So the list is: Don't slag METALLICA; don't slag the 'Rust In Peace' lineup; don't slag the two quitters; don't slag Obama. So there's not really a lot to say. But I do wanna thank… I wanna thank Universal; I wanna thank 5B, my management; I wanna thank Alex Milas and Chris Ingham from Metal Hammer. And I especially wanna thank all of you, because… People calling me golden. You guys are golden. Thank you very much. God bless you all."

MEGADETH is currently recording its new album for a tentative late 2015 or early 2016 release. The CD will be the band's first to feature LAMB OF GOD drummer Chris Adler and Brazilian guitarist Kiko Loureiro, best known for his work with ANGRA.

Drummer Shawn Drover quit MEGADETH on November 25, 2014 "to pursue [his] own musical interests." Guitarist Chris Broderick announced his departure from the band a few hours later, saying that he was exiting the group "due to artistic and musical differences."