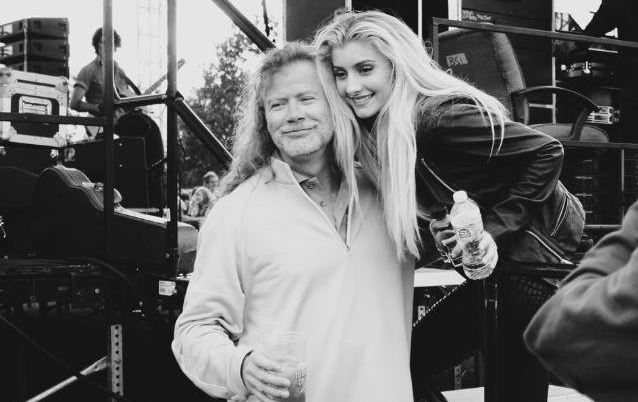 Dave and Electra Mustaine will be walking the CMA red carpet and will be available for photo ops with the media covering the event.

Electra in September released a lyric video for her new single "Life Is Good".

"The lyric video for 'Life Is Good' is really a reflection of all the good things in my own life in the country," the singer said. "The video shoot was a blast with everyone pitching in on the farm to help. Cameos include family, friends, neighbors, my horses Gerrit and Rocky — and even my little dog Gunnar! We had a great time creating it. I really hope fans enjoy and find inspiration from my new video!"

"Life Is Good" is an original song co-written by Electra Mustaine, Nathan Chapman and Blair Daly. Accomplished country artist Steve Wariner made a guest appearance performing guitar on the new single. The lyric video was shot on location at the Mustaine farm in Franklin, Tennessee. Electra found inspiration on her farm for her original creative concept of the video which she directed. "Life Is Good" is currently available for purchase on iTunes.

Electra Mustaine is a Nashville singer/songwriter originally from the small town of Fallbrook, California. Like her famous father, Electra is herself a bit of a rebel. However, instead of rock, Electra followed her heart with country music. Performing at county fairs and NASCAR events, she relocated to Music City in 2014 at age 16 to focus on her music and songwriting — collaborating with some of Nashville's best songwriters.

Dave Mustaine told Rolling Stone India that his family's move to Nashville was prompted largely by his daughter's decision to launch a country music career. He said: "The reason we moved out here was because I've made four records out here and all those times I was recording, I did live here. It really was comfortable to be here. The last time we were here, Electra was only two years old. We didn't know that she had the gift and once she started singing — I heard her sing one time and I was really convinced."

He continued: "I don't profess to be a singer first and foremost — I'm a guitar player that sings more than a singer who plays guitar. But with her, she really is. That's her strong point. For her, this is music city. It's all about country. It's where she's flourishing."