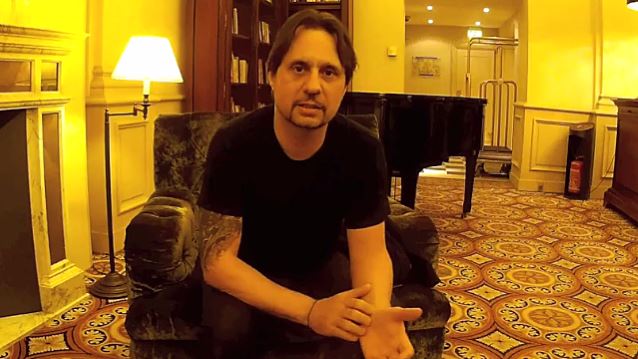 Metallart.org conducted an interview with former SLAYER and current PHILM drummer Dave Lombardo on November 18, 2014 in Paris, France. You can now watch the chat below.

Asked about his collaboration with art team SceneFour on an art collection, "Rhythm Mysterium", built from the new medium of rhythm-on-canvas, Lombardo said: "SceneFour is a company that put together artwork through rhythm. And what they did was was they took pictures, they photographed drummers in the dark, in very low light, with drums sticks that have light in them and the bass-drum pedals have lights as well. So when they're playing, you can see the trail of the motion of the drum stick. So you see all that. And then what they do is they print these pictures out on a canvas, and they mount it, and we're gonna be selling them online. And they're big — like, real big — prints."

Regarding whether he played any particular songs while the photographs were being taken, Lombardo said: "They were all drum solos. Because if you just use one song, it's just a beat, so the drum stick stays in one place. So I soloed, so those were when the pictures were taken. After they take the picture, then later they change the different colors. You know, in PhotoShop, you can change all the colors and everything. That's what they did."

SceneFour is the Los Angeles-based creativity house that has spearheaded the "collaborative art" movement through groundbreaking canvas work with the likes of RZA of WU-TANG CLAN, Chuck D of PUBLIC ENEMY and Bootsy Collins.