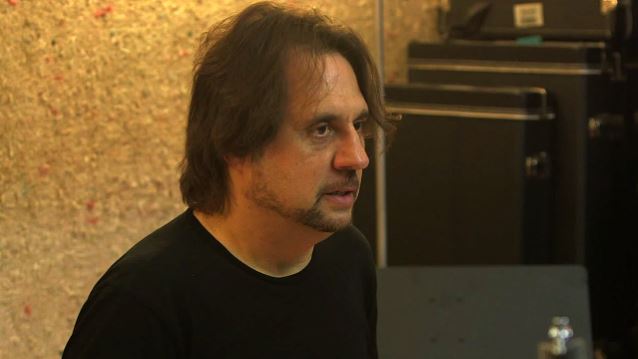 Brazil's Wikimetal podcast recently conducted an interview with former SLAYER and current PHILM drummer Dave Lombardo. You can now listen to the chat using the SoundCloud widget below. A couple of excerpts follow (transcribed by BLABBERMOUTH.NET).

On how being in SLAYER changed from the early years in the band to his final stint with the group:

Lombardo: "Things change, people grow. The normal process, the normal evolution that humans have. They grow up, they have their own homes. All they do is… When it's time to get together and play music, it's work, it's not a band. So that's the difference. When we were younger, it was like you were part of a gang, you were part of a team, and now it's just… you know… The last years, it was just like going to work."

On whether he wants to give his version of the circumstances that led to his latest departure from SLAYER:

Lombardo: "Not really, because it's already in the press, it's already in the media. I don't wanna bring that up again, because people, the fans say, 'Why is David talking about this?' So I don't care to talk about it anymore. And it's not because I'm crying or whining or complaining. No, it's because journalists ask me, and I'm being honest. But I refuse to speak about it anymore."

On whether he resurrected his 1990s band, GRIP INC., after his last split with SLAYER:

Lombardo: "No, I didn't. There was talk about it, but there was really not much going on now. I think we're planning on releasing a special EP with some old music with our old singer, Gus Chambers… He died several years ago. So that's all we're doing. And we also launched, on our Facebook page, on the GRIP INC. Facebook page, you're able to buy all our music digitally."

On his work with Disney:

Lombardo: "I've collaborated with Disney Animation. I've been asked to do music for a cartoon. It's called 'Dudes Of Legend County'. And that's been very exciting for me, because you have to write music that is very — like only two and a half bars of music. And that's really exciting for me. I've worked within that style before with Mike Patton [FAITH NO MORE]. So understanding the way Mike Patton worked, I was able to work on this cartoon for Disney. I hope the cartoon makes it, because it's a pilot. Pilots are cartoons that people in the industry, they watch and listen to and then they choose if it should go on the air."

On his opinion of SEPULTURA's current drummer Eloy Casagrande after the two worked together during the recording sessions for SEPULTURA's new album, "The Mediator Between Head And Hands Must Be The Heart" (on which Lombardo makes a guest appearance):

Lombardo: "I love Eloy Casagrande. He's got great chops, and he's just, I believe, one of the better drummers that are out there right now. And, you now, of course, he has that soul, that fire that I believe so much that drummers should have. They need to have rhythm and passion and soul when they play. And like I said, there's very few drummers that have that, and he's one of them; he has it. So I'm really proud of him. I like what he's doing. He's a great guy, and I hope to see him soon in Brazil when I do [my upcoming] drum clinic tour."