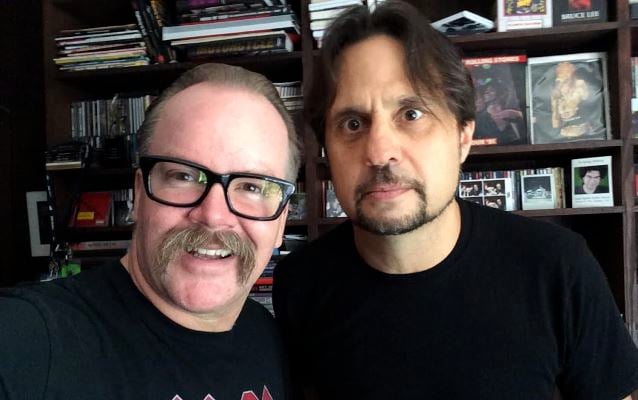 Former SLAYER and current PHILM drummer Dave Lombardo was interviewed on episode 110 of the "Let There Be Talk" podcast with rock and roll comedian Dean Delray. You can now listen to the chat using the SoundCloud widget below. A few excerpt follow below (transcribed by BLABBERMOUTH.NET).

On the musical chemistry of the original SLAYER lineup:

Lombardo: "I appreciate the nucleus of the band. Like [John] Bonham. When Bonham was part of [LED] ZEPPELIN. When his son [Jason] took over, oh my God. C'mon. Really? I have respect for Jason and for what he's done, but when he put a double-bass pedal on a single bass drum, that just blew it for me. It's, like, 'Really, dude? Your dad was about single bass.'

On the business disagreements that led to his latest departure from SLAYER:

Lombardo: "It's not just [guitarist] Kerry [King] and it's not [bassist/vocalist] Tom [Araya]. It's who handles all the external business.

"I don't wanna get into it too much… I just wanted things to be fair for not just myself, but for the band. Because I was noticing that the band was getting shafted. And it was bad.

"You see, when I go on stage and I perform, I perform with all my heart. When I go up there, it's like I'm going to war. It's blood, sweat and passion.

"When you do the math, it didn't make sense. You don't need a fucking college degree to do some simple mathematics. And when my attorney and I, we did the math, and we demanded the documents that were necessary to back up what my deal was about, red flags were popping up everywhere.

"I mean, my statement [explaining my side of why I sat out SLAYER's Australian tour in early 2013] on Facebook is clear. And it's still there, because if it wasn't true, I'd probably be sued for defamation of character. So, no. It's true and it's backed up by fact, and it's why it's still up there.

"All that shit, when it's all said and done, I can't go on stage and know that my bandmates, as well as myself, aren't being compensated for the work that we're doing. 'Cause we're out there, we're the ones out there, travelling, we're the ones sweating, peeling off our clothes that are just fucking full of sweat. And it's, like, 'Really? This is it?' So it just didn't make sense. Especially when you see other bands that are as successful as we are, especially during the 'Big Four' [shows that we played with METALLICA, MEGADETH and ANTHRAX]. And to see how SLAYER was travelling and how everyone else was travelling, it was kind of weird. [I was, like] 'What's going on here?'

"It's all good. If they wanna work with that organization, then so be it. But, hey, I'm a punk, and I'll always be a punk and I'll never [be a whipping boy]. Absolutely fucking not. I'm not gonna be that. So that subject, fuck it."

On SLAYER's late guitarist Jeff Hanneman, who passed away in May 2013 from alcohol-related cirrhosis of the liver:

Lombardo: "I have text messages [from Jeff]… The last text was, like, a month before he passed. 'Cause I wanted to get together with him to discuss what was happening with SLAYER. He wasn't happy at all. He'd text and go, 'What the fuck is going on, Dave?'"

On whether Jeff was still getting money while SLAYER was out on the road with Gary Holt (EXODUS) filling in:

Lombardo: "[Laughs] Yeah. Yeah, he was, but who's to tell how much? He didn't know a lot of things that were happening, like the other guys didn't either. And it was a surprise to him.

"We saw it coming. The years leading up to the spider bite, the drinking was getting heavy — very, very heavy. Including, I mean, Kerry as well. I mean, there was one show in Holland, [Kerry] said his equilibrium or something with his hearing, but I think it was that tall glass of vodka that he poured himself before getting on a ferry in London, and he splashed it with Coke. So here we have a large, 32-ounce fucking… a full bottle of vodka with a splash of soda. You're gonna wake up the next day and you're gonna tell me it was, 'Oh, my hearing. Something with my hearing. I couldn't stand up straight.' No, you were fucked up, man. [Laughs]"

On playing two songs with METALLICA at the U.K.'s Download festival in 2004 when Lars Ulrich was unable to make the show:

Lombardo: "That was amazing. What was great about that day was the rehearsal [in their tuning room], I had to go in there and go over the songs with them… Ah, it was awesome. I remember going into the heavy groove in 'The Four Horsemen', and I slipped into that groove, and it was so heavy and it was so on point, Kirk [Hammett, METALLICA guitarist] stopped playing and said, 'That's how it's supposed to be.' [Laughs] He turned to [METALLICA frontman] James [Hetfield and said], 'That's how it's supposed to be.' [Laughs] It was really smooth; that transition was smooth. But I loved playing with those guys. I love them to this day. Great guys. Lars, he's great.

"I wasn't familiar with their new music. I mean, the 'black' album was great after I got to listen to it a few times. It grew on me. But I appreciate the change. I totally get it now. At the time, I really wasn't into it. I was in a whole other genre of music at that time, so I can't even judge. But at that time, it just didn't hit me as a METALLICA record. It was just so polished and the songs were so clean."

On SLAYER's tendency to write riffs that sound alike:

Lombardo: "When you get to a point, like I get on stage with my former band [SLAYER], where the riffs start sounding similar to other riffs. So I'm playing 'Chemical Warfare', and I think I'm in another fucking song, and I'm, like, 'Oh, fuck. I thought I was in…' That really fucks with me. And then I'm trying to see what the guys are playing on the frets to distinguish what song… Oh, man. That's happened to me a couple of times, and that's a little frustrating. That's when you know, for sure, that your music is starting to sound the same."

On his status with AMEN:

Lombardo: "We recorded the songs [for a new studio album]… I don't know how many there were… 10 or 11 songs that we recorded. And [AMEN singer Casey Chaos] is still working on them. I don't know when it's gonna be released. We were booked to do a couple of shows in Europe, a few shows, but that fell through. The festival, I guess, canceled. But I'm not a member of AMEN. I'm a hired guest. I played on the record, and I agreed to do, on my free time, several shows. But I'm not a member of AMEN. Right now, my focus is PHILM, and I have other things going on, other projects that I do. The press release was done in a way where it made it sound like that was my band. [Like] that's my new band; I just joined AMEN… I don't mind playing [with AMEN]. We started rehearsing and it felt really good. But, unfortunately, these shows fell through. So I don't know when we're gonna do anything again."