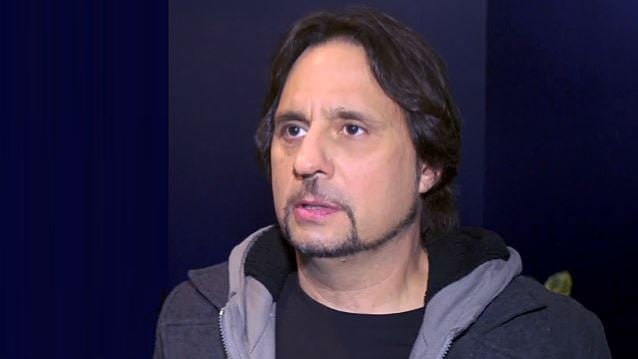 Former SLAYER and current PHILM drummer Dave Lombardo was a guest on last week's edition of "That Metal Show", VH1 Classic's centerpiece in original programming. In a behind-the-scenes interview, Lombardo was asked when the last time was that he saw legendary producer Rick Rubin, who worked on some of SLAYER's earlier albums, including the iconic 1986 LP "Reign In Blood". "A long time ago," Lombardo responded. "I saw him… He went to go see SYSTEM OF A DOWN at the Whisky [A Go Go] in Hollywood. And that was the last time. We haven't communicated since."

He added: "I have nothing against the guy. I think he's a brilliant producer. And what he did for SLAYER… I think he was responsible for taking that band to where the band is today."

Speaking to the TalkMusic Vodcast last year, Lombardo stated about what it was like working with Rubin: "It was an amazing experience, it was phenomenal. Because we were [previously] on Metal Blade, and I had heard a rumor that this producer for this record company, Columbia Records, was interested in the band. And when I told the [other] guys [in SLAYER], I said, 'Hey, man, there's this guy that's really interested in the band that wants to sign us to a major label. Well, obviously, it was Def Jam at the time, but they were affiliated with a major label. And [the other guys in SLAYER] were pretty much content with where they were on Metal Blade, but I made the phone call, and I contacted Def Jam. And Rubin ended up coming to my house, he picked me up and then we went to the studio, and I introduced the guys, and he gave us the whole rundown."

He continued: "[Rick is] amazing. I think, as a producer, he's obviously one of the best. He brings out the best in musicians. He really pulls out your best performances. 'That's great, but you can give me a better one.' And he would just keep motivating you and giving you his pep talks. 'You need a coffee? A candy or something?' [Laughs]"

Regarding Rubin's reputation for being hard to work with for certain artists due to his tendency to be very "in and out" of the studio while records are being made, Lombardo said: "I would think he doesn't deal with people that don't wanna work with him. If people [don't] wanna cooperate with him and trust his opinion and judgment… I feel that it's, like, 'You don't need me there.' I feel that at that point is when he doesn't get along with people."

He continued: "I don't know him that well. It's been a long time since I've spoken to him. But he taught me a lot about music, a lot about producing. Just being in a room with him and seeing his direction and what he was trying to convey to other musicians was fascinating. And that's helped me in my life and producing, especially with PHILM, in directing [the other members of the band] in what I want and how I want it to be played."