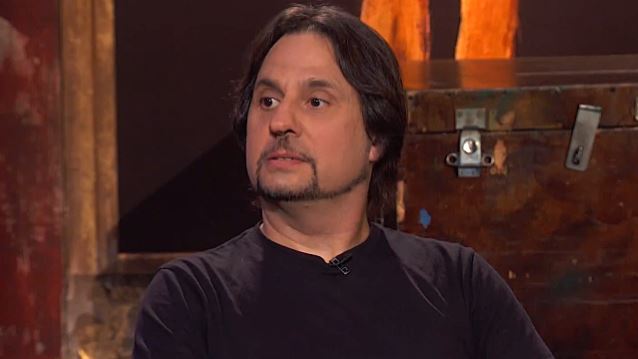 "That Metal Show", VH1 Classic's centerpiece in original programming, returns with an all-new episode this Saturday, March 7 at 9:00 p.m. ET/PT, repeating at 11:00 p.m. ET/PT. This week, former SLAYER and current PHILM drummer Dave Lombardo stops by the acclaimed hard rock/heavy metal talk show, hosted by Eddie Trunk, Don Jamieson and Jim Florentine. Lombardo discusses his musical influences, how he never warms up before he performs, and that he feels better than ever now that he is 50. The hosts ask Dave about his much-publicized departure from SLAYER and if he would ever reunite with the band, to which Dave replies (see video below): "Let's just say, if you ever see me on stage again with SLAYER, you'll know everything's resolved. That's it."

During a December 2014 interview for Trunk's podcast, "Eddie Trunk Podcast", Lombardo was asked if he would ever consider playing with SLAYER again. He responded: "Would I go back? For the fans, and to retire that band correctly, I'm not gonna close any doors. Like I said before, when all this went down, my door's open, and that's basically all I have to say. So [it's] all good."