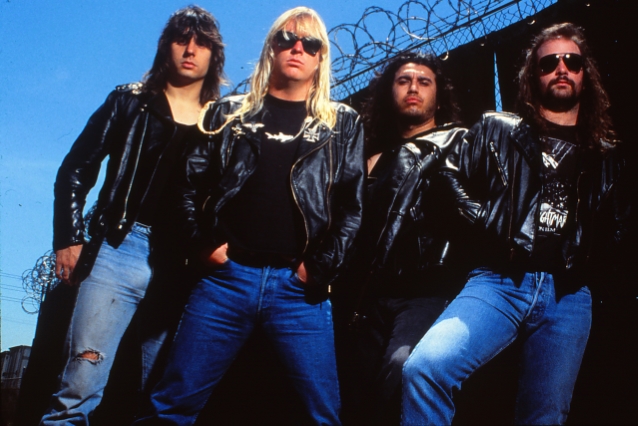 Former SLAYER drummer Dave Lombardo has penned a moving tribute to the band's late guitarist Jeff Hanneman. Hanneman died in May 2013 from alcohol-related cirrhosis of the liver. He is credited for writing many of SLAYER's classic songs, including "Angel Of Death" and "South Of Heaven".

Lombardo, who was the founding drummer in SLAYER and has played with them off and on since their formation, told Metal Hammer: "Towards the end of his time in SLAYER, [Jeff] had gotten to a point where his performance wasn't up to par with the rest of the band. The alcohol was taking its toll, and so were the operations he had had. It was sad, but we had to make the decision and break the news to him. I know that it crushed him.

"Before all that went on, we didn't know how long Tom [Araya, bass/vocals] wanted to continue, 'cause he was contemplating retiring even back then," he continued. "So Kerry [King, guitar] and I were talking about putting a band together, and we said, 'We need to recruit Gary Holt,' 'cause we knew him from EXODUS. As it turned out, Gary became the guitar player that took Jeff's place, and that was approved by Jeff. He was a big fan of Gary's playing — Gary had that feel and soul that Jeff loved in guitar players."

According to Lombardo, Hannemann would have been the against the idea of SLAYER calling it quits. "If Jeff was still here and still in SLAYER, he wouldn't want to retire," the drummer said. "He'd fight to keep the band going. He'd have taken the band by the horns and driven it on. His love and his passion was music and being onstage. That passion was dampened by toxins, but it was still there."

In a 2013 interview with Guitar World magazine, Lombardo stated about Hanneman's battle with the bottle: "Jeff was always a drinker. He always had a Coors Light tall can in his hand. Always."

"Jeff and I always drank," King added. "They called Steven Tyler and Joe Perry the Toxic Twins. We were the Drunk Brothers." He laughed. "The difference being that I don't wake up in the morning and need a beer. Jeff didn't know how not to drink."

Hanneman's SLAYER bandmates also revealed that Hanneman had been battling an arthritic condition for many years that was progressively worsening to the point of interfering with his playing.

Lombardo's most recent stint with SLAYER ended in 2013 when he made allegations about the way the group's financial bookkeeping was handled. He has since been replaced by Paul Bostaph, who was previously SLAYER's drummer from 1992 until 2001 and recorded four albums with the band.

Holt, who is still a member of San Francisco Bay Area thrash icons EXODUS, has been the touring guitarist for SLAYER since January 2011 when Hanneman contracted necrotizing fasciitis, also known as flesh-eating disease, from a spider bite in his backyard.

One day after concluding the second North American leg of its farewell tour in late August, SLAYER announced plans to continue the trek into 2019. The legendary thrash band is planning shows for South America, Australia and Japan, with more dates to be revealed.