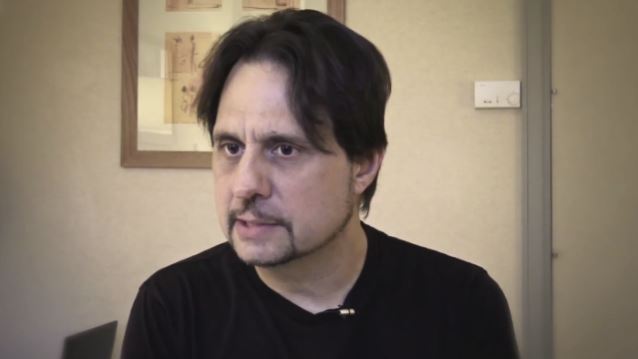 Former SLAYER and current PHILM drummer Dave Lombardo recently collaborated with American composer and actor Joseph Bishara on the score the upcoming horror prequel "Insidious: Chapter 3". The third installment in the "Insidious" franchise was written and directed by Leigh Whannell in his directorial debut and is scheduled to be released on June 5, 2015 by Focus Features.

"[Joseph] called me and asked me if I wanted to take part in creating some drums for it, and I thought I wasn't going to be able to do it, because I was gonna be [in Europe doing promotion and taking part in drum clinics], and he moved the whole schedule early," Lombardo told France's TV Rock Live (see video below). "And I was very grateful."

He continued: "We had a really, really good time creating the drums and recording them for the movie. So now 'Insidious' is gonna have Dave Lombardo drums on it. [There will be] no double bass, no double bass — [it's] just very ambient…

"I can make my drums sound like they're played by somebody that's happy, but then I can play my drums to make 'em sound like somebody's sad or scary. It depends on how you hit it and what you create."

Lombardo added: "Yeah, I love doing that. I love working on film scores. It's different. It's not that much different than FANTÔMAS and [FAITH NO MORE singer] Mike Patton; it's very similar.

Bishara scored the previous two movies for the franchise and also collaborated with James Wan ("The Conjuring", "Furious 7") — who directed the first two installments is co-producing the project — on "The Conjuring" and this year's "Annabelle".