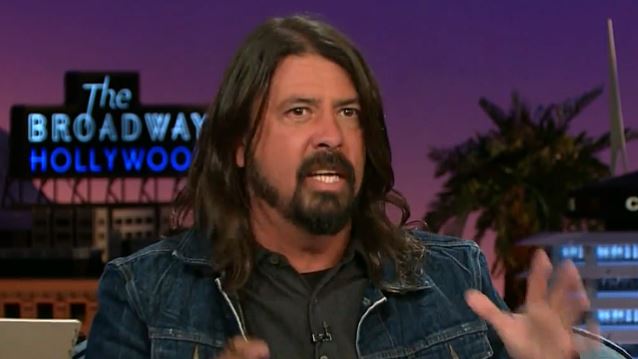 FOO FIGHTERS mainman and former NIRVANA drummer Dave Grohl spoke about his love of SEPULTURA during an appearance on last night's edition of "The Late Late Show With James Corden".

He said (see video below): "You know what's crazy? One of my favorite heavy metal bands of all time is from Brazil. This band called SEPULTURA. I mean, SEPULTURA, they're amazing, but one of the crazy things they did, they made this album called 'Roots'. But they incorporated crazy Brazilian instrumentation into, like, the heaviest music you've ever heard in your life. It kind of, like, changed the game. It was the heaviest thing ever."

Grohl wrote the foreword to "My Bloody Roots: From Sepultura To Soulfly And Beyond", the autobiography of former SEPULTURA frontman Max Cavalera.

Cavalera told Phoenix New Times: "Dave Grohl did an awesome intro. He tells a story about how he bought a $50,000 speaker for his studio sound system, and he pops in [SEPULTURA album] 'Roots' and it blew up the whole fucking thing. [Mimicking Grohl] ''Roots' blew up my whole system.' I love that story. If your album can blow up a $50,000 system, you're doing something right."