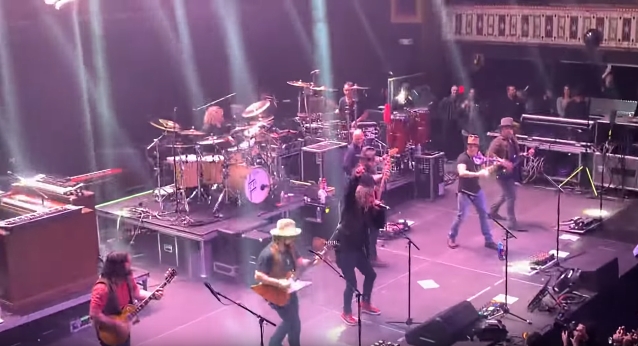 The American country band was performing at the Bud Light Dive Bar when the FOO FIGHTERS frontman stepped up to play the METALLICA classic his longtime friends to close out their 75-minute set.

In a 2015 interview with Creative Loafing, Grohl said that he bought the first METALLICA album, "Kill 'Em All", on cassette from a mail-order catalog in 1983. "I had never heard of them," he said. "I didn't know anything about them other than they had a cool name, and the description said 'thrash metal.' I didn't even know what that meant."

He continued: "I had listened to tons of punk rock music, and I loved MOTÖRHEAD, but thrash metal? That sounded scary and cool. So I sent them my $6 or $7 and a couple weeks later I get this tape in the mail. It was 'Kill 'Em All' and it blew my fucking mind. I will be a diehard METALLICA fan until the day I die because of that experience. It was like someone had sent me the Holy Grail. I was like, 'Ahhh! This is so killer!'"

FOO FIGHTERS and METALLICA are among the artists that performed on January 16 at the Chris Cornell tribute concert at the Forum in Los Angeles, California. A number of other rock and pop stars also appeared at the event, billed as "I Am The Highway: A Tribute To Chris Cornell", which was presented by Cornell's family and closest friends, with Jimmy Kimmel hosting.