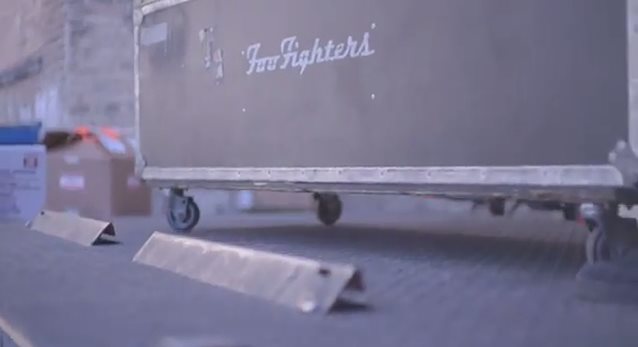 A new teaser has revealed that the name of the upcoming HBO documentary series starring FOO FIGHTERS is "Sonic Highways". According to The Pulse Of Radio, the trailer was unveiled following the cable channel's airing on Saturday night (May 31) of an edited version of last month's Rock And Roll Hall Of Fame induction ceremony, at which Grohl was inducted as a member of NIRVANA. The series will follow FOO FIGHTERS to eight iconic recording studios in different parts of the country, documenting the region's musical history as well as the making of the new FOO FIGHTERS album, which is due in November on Roswell/RCA.

Grohl told The Hollywood Reporter: "After making the 'Sound City' movie, I realized that the pairing of music and documentary worked so well because the stories give substance and depth to the song, which makes a stronger emotional connection to it. If you know the story behind the artist, or the story behind the studio, or the song, it widens your appreciation for the music."

Grohl added: "I thought okay, this is going to be the story that will influence the next FOO FIGHTERS record. We're coming up on our twentieth anniversary, we're an American band. Each one of these cities have had artists and music that have influenced us directly, so let's go there."

Among the cities the show will visit are New Orleans, Seattle, Washington D.C., Chicago, Los Angeles and New York.

As for how the project has influenced the sound of the new FOO FIGHTERS record, Grohl said, "You'll recognize FOO FIGHTERS in this record but you'll also be surprised by us. We're doing things that we've never done before. And I want to say that it's only eight songs but I think it might be our longest record because, as I was writing these songs, I had to take a cinematic approach."

Grohl has apparently been so inspired by the project that he's already thinking of the album after this one. He revealed, "I already know what we're doing for the next FOO FIGHTERS record… I came up with this idea a month and a half ago. The guys were, like, 'Dude, we have to finish this first.'"

"Sonic Highways" will premiere this fall.