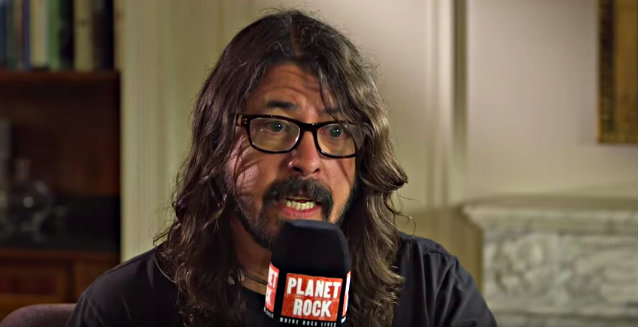 Dave Grohl spoke to U.K.'s Planet Rock about how PANTERA was partly the inspiration for FOO FIGHTERS' "open-door policy" while making the latter band's new album, "Concrete And Gold", at Hollywood, California's EastWest Studios — where they drafted in pop singers Justin Timberlake and Shawn Stockman (BOYZ II MEN) to guest on the disc.

"Basically, the way the FOO FIGHTERS work, we get along with everybody," Dave explained. "For years, we've always been that band, when we get backstage at a festival, the first thing I do is I pick up a bottle of whiskey and I just walk around banging on dressing-room doors to see who's fun, to see who's cool. It could be Tricky, or it could be MUSE or it could be… whatever — I just look for pals.

He continued: "Actually, that's something I learnt from PANTERA. Back in the day, we did a show with PANTERA and we became friends and I would go see them on tour all the time. And I realized that you'd be backstage at a PANTERA show and there'd be, like, Marilyn Manson is in that corner, and Kato Kaelin is in that corner, and Britney Spears is in [that corner]… Everybody loved to hang with PANTERA. So, to me, that was the coolest thing about them — they were the sweetest people and they had this open-door policy.

"But also with our band, we don't really plan too much when it comes to making music," Dave said. "So when you're at a studio, like the studio where we recorded, every week there was someone else in there. Like, Glenn Hughes from DEEP PURPLE was down the hall with Jason Bonham, and then Joe Bonamassa and then Lady Gaga is over there and then WOLF ALICE is over here and Rufus Wainwright is over there. So the three months we were there, we were meeting all these people, we were drinking in the parking lot, we were outside smoking, and you just make friends, and it's literally that easy."

Pushed by Planet Rock's Wyatt about whether they would test their open-door policy with an artist like Justin Bieber, Pat responded: "I would invite him in. Come on!"

Concurring, Dave said: "I think yes. I mean… come one, come all, y'know. We're not building any walls here around the FOO FIGHTERS okay? It's an open-door policy.”

The only condition, Dave joked, was there would need to be "extreme musical vetting."

"Concrete And Gold" moved 127,000 equivalent album units in first week of release to debut at position No. 1 on the Billboard 200 chart. Of that sum, 120,000 were in traditional album sales, which also makes the effort the top-selling album of the week.