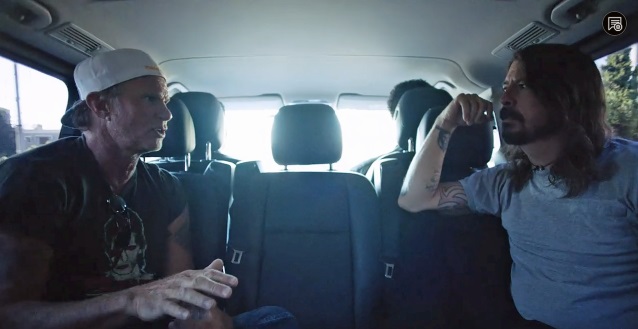 According to The Pulse Of Radio, FOO FIGHTERS mainman Dave Grohl and "Landmarks Live In Concert" host — and RED HOT CHILI PEPPERS drummer — Chad Smith discuss the music their families listened to when they were growing up and how it impacted them in a video preview of this Friday's (November 10) broadcast of the new PBS series, which will feature the FOO FIGHTERS performing at the Acropolis in Athens, Greece.

Grohl begins: "When I was a kid, '70s AM radio…" with Smith interjecting, "RULED!" Grohl continues, "I swear to God, that's got such a big place in my heart. 10CC, Andrew Gold and Gerry Rafferty."

Grohl explains that while he listened to hardcore punk growing up, his father was devoted to classical music, his mother loved show tunes, and his older sister liked new wave and classic rock at the time, but Grohl adds: "I would dip into everybody's albums and listen to them." Smith says: "I did the same thing," and recalls going through his own older sister's collection of soft rock records.

An ongoing documentary series, "Landmarks Live In Concert" captures performances by global superstar artists at monumental locations and landmarks around the world.

Smith interviews the featured artist in each episode and told The Pulse Of Radio that he thinks the fact that he's a musician as well puts them at ease. "What's cool is I think that they feel, when they're talking to a so-called journalist, maybe their guard's up a little bit or they're not maybe as comfortable as when they can talk to somebody who's a fellow artist who's there, who's doing what they do," he said.

The FOO FIGHTERS taped their performance at the historic Acropolis back in July.