In a recent interview with Holland's FaceCulture, DARKTHRONE's Nocturno Culto (real name: Ted Skjellum) stated about the upcoming CD, "I think the focus is now more heavy metal and rock and roll, really, and that's a style I like to play on the guitar, and that shows on our new album as well, because my songs on that album are very heavy metal-oriented."

He added, "I think the first recording session we had on this album, I had a really good feeling, as usual, but I think it was something extra. I think this album is… It's not cool to say it's probably some of the best things we did, but I believe so. The songs are strong, and they have a good production, in our point of view.

"We really don't belong in the modern scene; that's why we're kind of outsiders. In our hearts, we still belong to the underground, and that's where we're comfortable."

Regarding the "Circle The Wagons" cover artwork, Nocturno Culto said, "It has an Indian theme, actually; I don't know if any band did that before. Dennis Dread is the American artist doing the front covers for the last three albums, including the new one. Mr. Necro, our kind of guy on the cover, he kind of has Indian things."

Peaceville Records released DARKTHRONE's "A Blaze In The Northern Sky" album on 180g heavyweight vinyl with gatefold sleeve in December.

This vinyl edition of the album is limited to 1,000 numbered copies and is issued on 180g heavyweight vinyl in a gatefold sleeve which features new liner notes written by Nocturno Culto especially for this release. 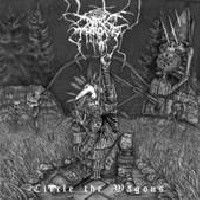