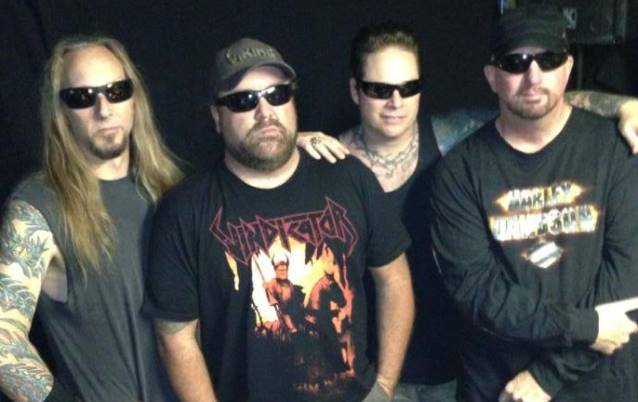 Three members of legendary thrash metal pioneers DARK ANGEL rehearsed for the first time last week in preparation for the band's upcoming reunion dates. Eric Meyer (guitar), Jim Durkin (guitar), Ron Rinehart (vocals) and Michael Gonzalez (bass) came together in a Los Angeles-area rehearsal to run through a set of the band's classic songs. Drummer Gene Hoglan, who is also involved in the group's reunion, was unable to attend the rehearsal since he was busy touring with his "The Gene Hoglan Experience".

A short video clip capturing some of what went down last week can be seen below.

As previously reported, DARK ANGEL will reform for a limited number of appearances in 2014 in the U.S. and select festivals in Europe. These dates are still pending and have not yet been booked at this time.

The confirmed lineup for these rare and unique, select 2014 shows will be:

During an appearance on this on the September 8 edition of the "Heavy Metal Mayhem" radio show, Hoglan spoke about the status of the planned DARK ANGEL reunion, saying: "We are trying to see if it can be something that we can all pursue. We all are in discussions.

"[Original DARK ANGEL vocalist] Don [Doty] got a little rambunctious, a little enthusiastic with some of the things that he put there [on the Internet regarding a ppssible reunion]. And we had to speak to Don for the first time, I guess, to get him to go, 'Hey, wait a minute…'"

He continued: "We all understand — we all should understand — that this isn't really just a matter of calling up the guys, saying, 'Let's put the band back together,' and then doing it. There's a lot more involved with it than that. So we're in talks and we're trying to see the future in it. And things are going well. We're all entertaining the idea, definitely, rather than somebody going, 'Nope. I'm not gonna do it.' And we even reconnected with [guitarist] Jim Durkin and we'll see what the possibility might be. And I'm trying to see if this works in my schedule, because I am of the mind — and this is just my opinion — but I am of the mind that a DARK ANGEL without Gene Hoglan is not a proper representation of the music, just like… If you're gonna reunite, I would want the entire band to reunite — the band that made the records. And that means the entire band. We had two vocalists. So we'll see where that goes even, you know?! But we're in talks and we're trying to see if we can make this a viable thing.

"The most important thing for, I think, any of us, and especially me, and I know a couple of the other guys that are involved that the legeacy of the band is very important. And if the band has attained some of kind of underground legendary status over the years, then if we do wanna return, a lot of people have great expecations of us, we'd better exceed those expectations.

"Like [former DARK ANGEL vocalist] Ron Rinehart said yesterday, the definition of 'good' is 'not bad.' [laughs] We don't wanna come out and even be great; we wanna be No. 1. And that's a very heartening attitude.

"If some of the people that might wanna get involved with this… You've gotta do it for the right reasons. This is for the fans. And we're gonna come out and disappoint the fans, don't do it. If we're gonna come out and make the fans go, 'Yes, I expected something great and I got godly.' Then there's a reason for doing it. And we're just trying to see if we're all on the same page for that. And so far we are; everybody wants to come out and do a great job, if we get to do this. Scheduling is the main issue, but we are trying to see what we can pull off, actually."

DARK ANGEL's management issued a statement last month accusing Don Doty of displaying a "lack of responsibility" by posting "false information" and starting "unfounded rumors" that have been "creating confusion" among the group's fans.

Doty previously made an online posting in which he claimed that Hoglan would not take part in the DARK ANGEL reunion because Gene was "unable to make the practices" due to his "many commitments."

DARK ANGEL guitarist Jim Durkin said in a statement that any talk of the band's reunion was "premature," and added that "when I was last in the band, Ron Rinehart was my singer. And IF the band were to come back and continue. he would STILL be my singer. He was our rock when we needed him and there is NO WAY I would do this without him. He and I talk daily and are as close now as ever. If anything, all this talk has brought us all back into more frequent contact! Which is a wonderful thing." 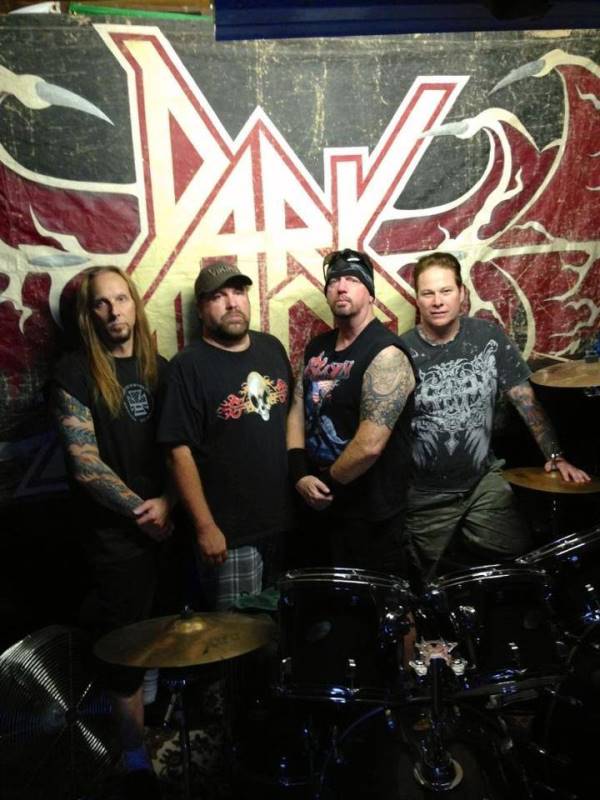