To celebrate their 35th anniversary and the 30th anniversary of their legendary album "Darkness Descends", reunited California thrashers DARK ANGEL will play the LP in its entirety on October 8 at the Vogue Theatre in Vancouver, British Columbia, Canada. The band will also include songs from "Time Does Not Heal" for the 25th anniversary of this classic release.

The Vancouver show will mark the first DARK ANGEL appearance in Canada since 1989 and the band's exclusive West Coast appearance in North America for 2016.

Tickets for the concert go on sale on Friday, April 8.

DARK ANGEL released two albums with Don Doty on vocals — 1984's "We Have Arrived" and 1986's "Darkness Descends" — before he exited the group and was replaced by Ron Rinehart (after a brief stint with Jim Drabos in 1987). The band issued two more studio LPs — 1989's "Leave Scars" and 1991's "Time Does Not Heal" — before calling it quits in 1992. Rinehart, drummer Gene Hoglan and guitarist Eric Meyer reassembled DARK ANGEL more than a decade ago but were forced to abandon their reunion plans after health issues reportedly put Rinehart's singing career on hold.

Asked how it feels playing together as DARK ANGEL again, guitarist Jim Durkin told "The Metal Magdalene With Jet" show on Metal Messiah Radio: "One thing I can say about this band is we laugh a lot. We have a pretty twisted sense of humor, and there's some things that we say that only we get, when we're talking about stuff, old stories or something. And we laugh a lot, and that's really important. No matter where we go, we're always cracking up or cracking on somebody or making fun of somebody. We laugh a lot, and that's the key right there; that's what makes it so much fun. You know, everybody's been in a band with somebody where they're, like, 'Oh, God, I've gotta see that guy again. Oh, I've gotta put up with him or her.' Or whatever. And it’s not like that here. We have a lot of laughs. We make fun of each other and everybody's got a good sense of humor about themselves."

Regarding whether there is new DARK ANGEL music on the way, Durkin said: "We have always had some things in the works, and there's some demos laying around. Yes. I won't give everybody a time limit. I want everybody to be excited, and it's gonna blow your heads off. But we want it to be the most badass thing that we can possibly do, and trust me, it will be." 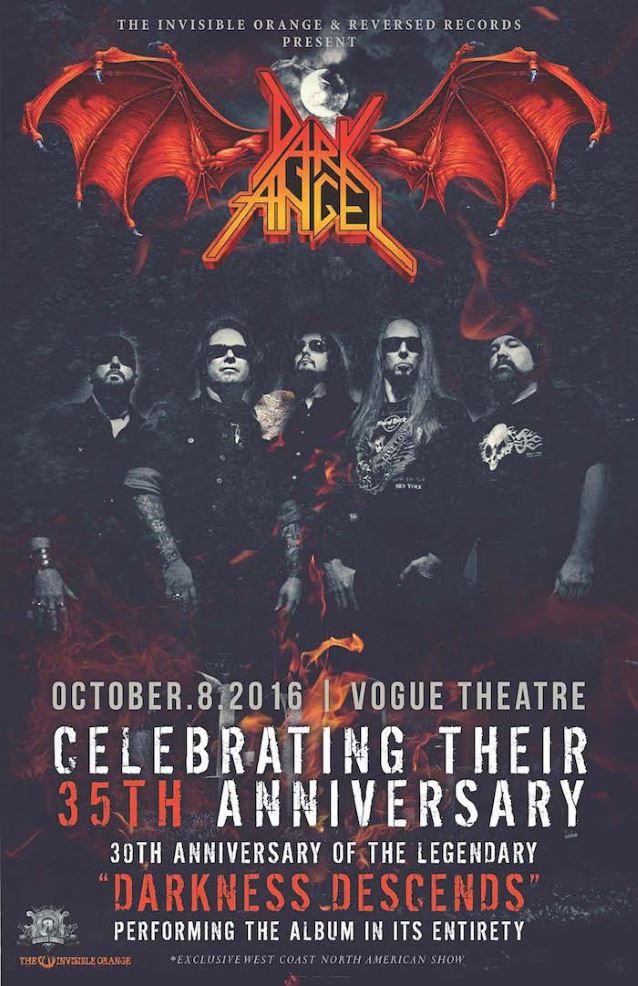