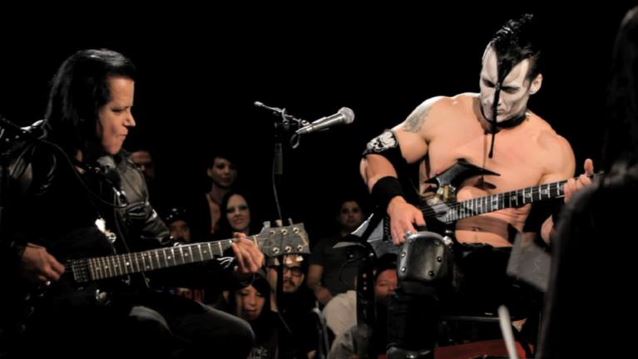 Legendary frontman Glenn Danzig (DANZIG, MISFITS, SAMHAIN) has released the long-awaited "Danzig Legacy" TV special, produced and directed by Mark Brooks (Adult Swim's "Metalocalypse") and Evilive Records. A 50-minute showcase with appearances by former MISFITS guitarist Doyle Wolfgang Von Frankenstein, PRONG mainman Tommy Victor and Steve Zing, the special — which was was filmed in May 2012 in Glendale, California — is available for rent now for a 24-hour streaming period for $9.99 through Vimeo On Demand.

Says Brooks: "My idea was to do a take on the Elvis '68 special, only with Danzig, showcasing all the aspects of his legendary career from MISFITS to SAMHAIN, and ultimately to his self-titled outfit DANZIG, that finally achieved him worldwide success."

In an April 2013 interview with Full Metal Jackie, Danzig stated about "Legacy": "The 'Legacy' TV special was an idea that was brought to me and it was an idea that Mark Brooks had; he does 'Metalocalypse'. It was basically to do like a DANZIG 'Legacy' TV show loosely based on the Elvis [Presley] '68 Comeback special; it revisited a lot of his past and a lot of stuff. So we did that with the 'Legacy' TV show. It was performance pieces that I do, then there's the band playing live, we do [songs from] DANZIG, SAMHAIN. Then for the MISFITS thing, we did what Elvis did when he sat down with Scotty Moore and the Memphis Mafia and we just did them all right there live, sitting and everyone's around us; there's no backstage, we're just on a little podium in from of everybody. And so we did a bunch of MISFITS songs and Steve [Zing] was just playing on a cylinder or something; it was pretty cool. We were doing the 'Legacy' shows anyway around that same time period, so we just thought we'd put it on film while everybody was there."

In other news, Danzig is readying a series of catalog reissues, in some cases will be issued on new formats (including vinyl) for the first time ever. All titles will see release on Danzig's own Evillive Records in 2015.