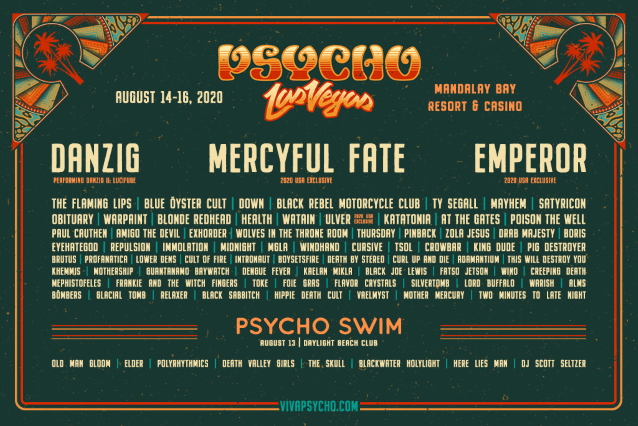 Psycho Las Vegas will continue to redefine America's conception of what a festival can be, taking over Mandalay Bay Resort and Casino for the second year in a row August 14-16, 2020. Now approaching its fifth consecutive year in the sweltering neon decadence of Las Vegas, the resort-wide casino takeover will utilize four stages including the world-class Mandalay Bay Events Center, the iconic House of Blues, Mandalay Bay Beach and Rhythm & Riffs Lounge, located at the center of the casino floor.

This year's Psycho Las Vegas lineup features more than 70 iconic acts, offering fans one of the most unique and immersive festival formats in the world.

Performance highlights will include:

* DANZIG will celebrate the 30th anniversary of arguably its best record, "Danzig II: Lucifuge", and will also be the only performance of the album in entirety in the U.S. this year.

* MERCYFUL FATE will fly in for an exclusive reunion performance in the U.S. for 2020, also marking their first performance together since 1999

* AT THE GATES will perform "Slaughter Of The Soul" in its entirely, celebrating 25 years of the album

* DOWN will celebrate the 25th anniversary of its debut album, "NOLA"

* Reunion performances by ADAMANTIUM and POISON THE WELL, who are also celebrating the 20th anniversary of their "Opposite Of December" album

* EMPEROR, WATAIN and SATYRICON will make special one-off appearances at the festival

* CULT OF FIRE and MEPHISTOFELES will make their U.S. debut performances at Psycho Las Vegas

Tickets for Psycho Las Vegas as well as the Psycho Swim pre-party, which requires a separate ticket from the main festival pass, are on sale now.

Tickets for all Psycho Las Vegas events can be purchased at VivaPsycho.com.