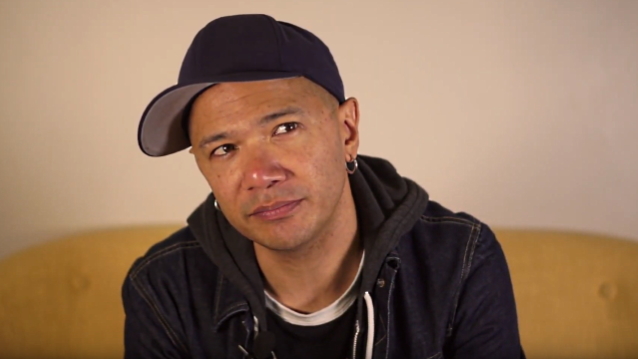 Danko Jones — the guitarist/vocalist of the Canadian hard rock trio DANKO JONES — recently spoke with Loud TV. The full conversation can be seen below. A few excerpts follow (as transcribed by BLABBERMOUTH.NET).

On the band's current trajectory:

Danko: "Feedback [for] the last two albums has been pretty good, pretty positive. Everybody seems to be digging in. These albums that we've done with Rich Knox on drums, I think they've been our best albums. I think they're just getting better and better. 'Fire Music' was out in 2015 [and] was our best album to date, and then I think 'Wild Cat' in 2017 bested it, and now 'A Rock Supreme' bests both. We started working with Garth Richardson on this album, and we had a great time. The last two albums were with Eric Ratz. We had a blast with Eric as well. We've been lucky that we've worked with some really cool producers."

On the title of their latest album, which nods to John Coltrane's "A Love Supreme":

Danko: "We just ripped off his album title, and we did that for 'Fire Music' too, but nobody knew that. It's an Archie Shepp record, but you don't have to know this stuff. We just do it. 'A Love Supreme' is more obvious than 'Fire Music' — it's arguably top three most popular, most successful jazz albums that were ever released. It's pretty top-shelf. It was just a joke. We were throwing out album titles to each other, and Rich came up with 'A Rock Supreme' just as a joke. We thought it was pretty sacrilegious to do that to 'A Love Supreme', so that made it cool for us, because it would piss off a lot of jazz purists."

On his relationship with GUNS N' ROSES bassist Duff McKagan:

Danko: "We toured with him for a lot of 2013 with different bands. We toured with his band LOADED in Australia, and we toured with his other band WALKING PAPERS in America, both in the same year. We spent a lot of time with Duff, and I put out a book last year called 'I've Got Something To Say', and Duff wrote the foreword, something he promised me he would do in 2013. It was really nice of him that he did it, even though when I asked him for his piece, that was, like, a week before GUNS N' ROSES announced they were getting back together, so his world was really busy and he still found the time to write it for me. I thought that was really very cool of him. He's a punk rocker, and I think a background in punk rock really grounds a person and makes them... There's a lot of vetting that goes on in punk rock scenes to the point where there's no place for ego. No one can stand it. It's one of the tenets, I think, of punk rock. You definitely can tell when someone comes from punk rock and someone who doesn't. [He's] a really grounded guy."

On the continued influence of Lemmy Kilmister:

Danko: "We spent a lot of time with MOTÖRHEAD and we played one-off shows with them numerous times. He was very nice to us. He was very kind to our band — all of them were, including the crew. Mikkey [Dee] and Phil [Campbell] and Lemmy and all the MOTÖRHEAD crew were very kind to us. We learned a lot from them, learned what to do, and also got to sing with the band over a dozen times over the years."

Danko: "We have a problem in our band trying to decide what covers to do. It's really hard for us to decide. We've been around for 23 years, but we only have a handful of covers that we've ever done. We just put out a single called 'Fists Up High'. It's the newest single off 'A Rock Supreme', and the b-side of that is a PEACHES cover. We can all agree on PEACHES. We've done MISFITS covers, so we can all agree on the MISFITS."

Danko: "We [first] toured with VOLBEAT in 2013. They're definitely unique in the sense that they're from Denmark and they're the band that became the number one band in the scene, but it makes sense. They've got the best elements and they've put it together in the best possible way, and their songs are very catchy and very heavy. Why wouldn't a kid get into that? If they like the MISFITS and they like SOCIAL [DISTORTION] and they like Johnny Cash and they like METALLICA, it's elements of all of that in a rock format. It makes total sense."

On the current state of rock n' roll:

Danko: "This ridiculous, viral pull-quote from Gene Simmons saying that rock is dead... This follows me in almost every interview I do. They ask me, 'Oh, do you think rock is dead?' It's from what Gene Simmons said. It was uttered by a man who lives in an ivory tower. There's now way Gene Simmons is connected to the rock scene down below, where all us cretins live. If he was connected to it, he'd know that there's bands like VOLBEAT. There's our band. I can name you 20 other new, exciting, original bands who have, like, two or three albums under their belts that are amazing... VOLBEAT are at the top of that heap, and look what they're doing — they're playing arenas. There is definitely a place for rock music today. The people who say rock is dead weren't listening to it to begin with. I will agree that there's no rock scene anymore. There's a metal scene and a punk rock scene, but the rock scene, it's not as connected. I think bands like us and VOLBEAT, we try to make connections with bands because we come from that place of punk rock and metal where we're all connected by labels and by scenes. There's just more of a connection."

"A Rock Supreme" was released on April 26 via M-Theory Audio (U.S.), Rise Above (UK), Indica (Canada, AU, NZ) and AFM (rest of the world). The album was produced by Garth Richardson (RAGE AGAINST THE MACHINE, RED HOT CHILI PEPPERS) and features cover artwork by Ulf Linden (GRAVEYARD, EUROPE). The band is currently in the midst of an extensive European with VOLBEAT and BARONESS.