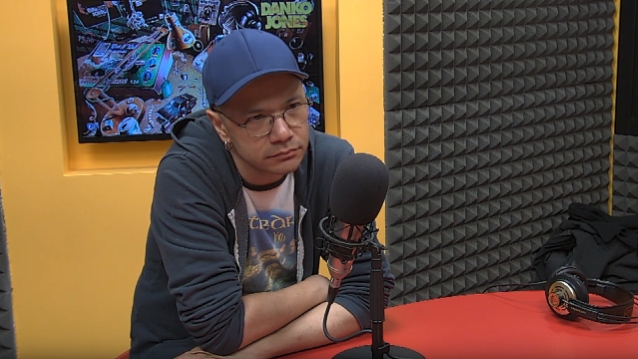 Danko Jones has defended Paul Stanley over lip-sync accusations on KISS's final tour, explaining that "that's his own business."

Ever since KISS's "End Of The Road" trek launched in late January, there has been persistent online chatter about Paul allegedly singing to a backing tape. The speculation stemmed from the fact that Stanley had been struggling to hit the high notes in many of the band's classic songs for a number of years.

During a recent interview with Barbara Caserta of Italy's Linea Rock, Danko — a self-proclaimed massive KISS fan — was asked for his opinion of KISS's farewell tour and whether he cares about the claims that KISS is using pre-recorded tracks during its live performances.

"Well, thank you giving me the option to say 'I don't care,' because I don't," the Canadian rocker and leader of his namesake band responded (see video below). "I was gonna lead with that, because it's not my band — it's their band — so I don't care what they do.

"To me, they've made so many mistakes and so many successes and so many right decisions, but what endears me to KISS is the fact that they can have great success with so many missteps," he continued. "And this is a misstep — 'End Of [The Road]' tour is a misstep. As far as Paul Stanley using backing tracks, that's his own business. I know that there's some singing problems there, but there's also no performance problems. He looks great. So there's that as well. The same situation would happen if he can sing like a bird, but he can't move around anymore without falling on his butt. That would also be an equal issue. So I don't care about that.

"My biggest thing is Tommy [Thayer, guitar] and Eric [Singer, drums] should have their own makeup — that's all. If they wanna have a three-year final tour, that's their business. If people are gonna show up, they might as well. They don't know anything else to do other than spend their money. So if this is gonna relieve boredom for them, then enjoy your life, if people are gonna show up. Just don't charge too high a price, 'cause you don't need the money, and just let everyone — as many people as you possibly can — see the show. That's all I would say. And then have a blast. And whether you can pull it off and sing great or not, like you did in '76, who cares, if people are gonna show up. But Tommy and Eric — I've always said this — shoud have their own makeup."

Former SKID ROW singer Sebastian Bach recently defended KISS against claims that the band is using pre-recorded tracks during its farewell tour, saying that Stanley sang "his ass off LIVE" during a recent concert in California. "I have seen way more obvious use of backing tracks than with KISS," Sebastian wrote on Twitter.

FOZZY frontman Chris Jericho also defended Stanley's vocal performance on "End Of The Road" tour, saying that the "Star Child" "has nothing to prove to anybody." Jericho explained: "He's one of the greatest rock and roll singers of all time. I think that's something that anybody would say. I would much rather have him use the technology that's available to not sound like he's hurting himself, which then makes me not enjoy the show as much."

Most fans assumed that Sixx was referring to KISS, especially since Simmons has previously slammed bands who used backing tapes for not being honest enough to include that fact on their concert tickets.

After KISS played on NBC's "America's Got Talent" last September, Stanley was asked by Rolling Stone if that was actually a live performance or if he and his bandmates tracked it earlier. "What you tend to do is record it live and that way you know that everything is as it should be," he responded. "It's not like going into the studio or anything like that. It's…with all its imperfections, it's live."