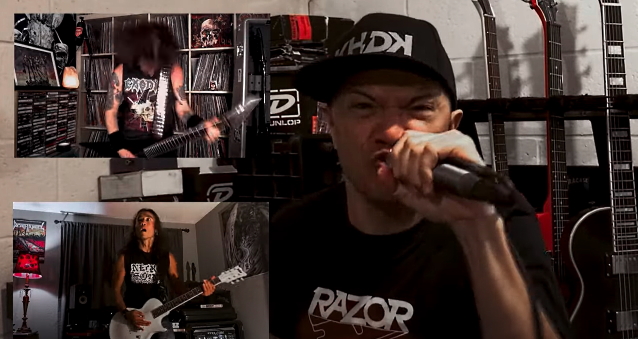 Danko Jones (DANKO JONES) has teamed up with Daniel Dekay (EXCITER) and Ted Aguilar (DEATH ANGEL) to record a quarantine cover version of the SLAYER classic "Mandatory Suicide". Check out the video below.

In a 2013 column for the Huffington Post, Danko said that DEATH ANGEL was one of his favorite bands of all time. He wrote: "I remember seeing people around Toronto wearing their shirts, not sure of who they were and yet intuitively knowing that was my band, kinda like when you see someone across a crowded room and sparks fly. I went and bought their only album out at the time, 1987's 'Ultra-Violence'. METALLICA was epic; SLAYER was evil; but this was the rawest most obnoxious piece of metal I had ever heard up 'til then. It remains in my top 10 metal albums of all time. Through countless listens, it has the unshakable ability to be as fresh and bone-crushing as the day I first heard it, despite them laughing at my sorry ass when I first met them at 16 years old."