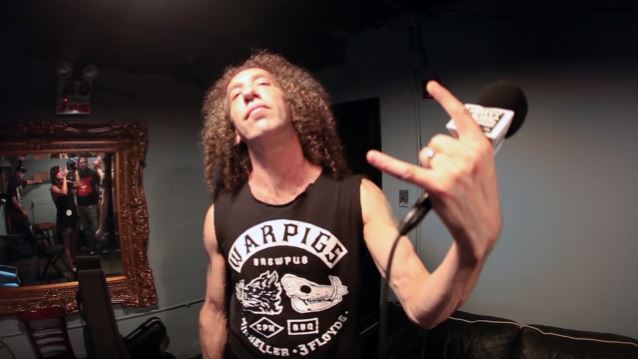 Jo Schüftan of Horns Up Rocks! recently conducted an interview with bassist Dan Lilker (NUCLEAR ASSAULT, BRUTAL TRUTH, ANTHRAX, STROMTROOPERS OF DEATH). You can now watch the chat below.

Asked about STROMTROOPERS OF DEATH frontman Billy Milano's recent announcement that the band would reunite in 2016 to celebrate this year's 30th anniversary of the group's classic debut album, "Speak English Or Die", Lilker said: "I know there's gonna be a reissue, but him talking about a live show is all a little premature, let's say. It's gonna be the 30th anniversary of 'Speak English Or Die', so there's gonna be yet another reissue. I say it with a slight air of cynicism. And, yeah, it'll be cool."

He continued: "Billy might have made it seem like [a reunion show was confirmed], but he didn't consult anybody else that played in S.O.D. He just kind of announced something, and we went, 'Huh?' That's what happened."

Asked if he would do the S.O.D. reunion show if everyone else agreed to it, Lilker said: "Yeah. I don't have any differences with anybody. It was never me. I would do it as long as I didn't have any other previous plans on that day. If anything else I have already confirmed is confirmed, I wouldn't do it, but if they say, 'Hey, what are you doing July blah blah blah this year,' I'd go, 'Okay. Fine.'"

In October 2011, ANTHRAX and STROMTROOPERS OF DEATH guitarist Scott Ian was asked by UnRatd magazine if there was any chance of another S.O.D. reunion, to which he replied: "No. I think I can safely say that, yeah. It was never supposed to be anything more than it was. As far as I'm concerned, we did too much with it. It started out as a comic book strip that I drew in the studio and then turned into this record that we made, but you know, that's all that it is for me. It's the opposite of THE DAMNED THINGS [a supergroup featuring Ian alongside FALL OUT BOY and EVERY TIME I DIE members]. For me, it was never meant to be a real band with a schedule and making records and touring. S.O.D. was supposed to be the 'anti' of that, it was supposed to just be about having fun and never having it turn into something real where all of a sudden it's not just fun anymore — it becomes a job, it becomes a business. And I'm glad everyone around the world got to see it at least once because in '99 and 2000 we played everywhere and I don't feel the need to go out and do that again."