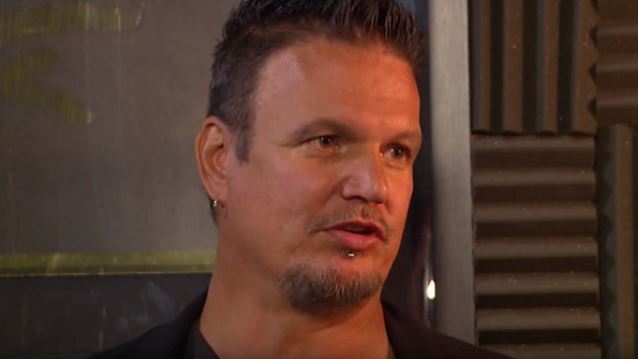 On Tuesday, April 26, DISTURBED guitarist Dan Donegan called in to the "3rd String Morning Show" on the 97.7 WQLZ radio station in Springfield, Illinois. You can now listen to the chat using the SoundCloud widget below. A couple of excerpts follow (transcribed by BLABBERMOUTH.NET).

On the success of DISTURBED's cover of the classic SIMON & GARFUNKEL song "The Sound Of Silence" and Paul Simon's recent endorsement of it:

Dan: "Well, I mean, that right there is enough. The fact that Paul Simon actually even heard of the band, or has responded and sent us an e-mail… And he's been talking about it himself. I heard an audio clip of him in a U.K. BBC interview talking about our version of it. Obviously, we were hoping that we did it justice in his eyes, because he's the writer. So to get his blessing is just amazing. But we wanted to take a song and… Historically, for us, whenever we approach covers, we just like that challenge of trying to take something that is a great song or great lyrical message and try to put our own interpretation of it. And this one was clearly very challenging for us, 'cause we were taking a slower song and still thought, 'Let's continue down this path of not getting aggressive, but maybe having a more haunting delivery to it. I think we just kind of… Once we got in there and started working on it, we really felt like we kind of hit it out of the park on this one."

On performing "The Sound Of Silence" live during DISTURBED's current tour:

Dan: "Well, I think when we first discussed it in the studio of doing the song, the first reaction, I think, from everybody was to add an aggressive riff, add some syncopation to it, and I wanted to take the opposite approach. And I thought, 'We've done that before. I don't wanna be predictable with it. Let's challenge ourselves musically and as artists to really try to have that song to where it's up to David's [Draiman] vocal delivery to really deliver the song from start to finish and really have a more vulnerable track for him.' So we wanted to create a bed of music that was gonna be complimentary towards his vocals and not something that would stomp on it or get in the way. So that real challenge was just finding the right key to play the song in, finding that range for him that was gonna show a different side, vocally, for him that he hasn't gone before."

Paul Simon reportedly reached out to Draiman to offer his praise for DISTURBED's cover of "The Sound Of Silence" directly. Simon saw the band perform the song on the March 28 edition of "Conan" and sent Draiman an email in which he wrote, "Really powerful performance on 'Conan' the other day. First time I’d seen you do it live. Nice. Thanks.”

Draiman posted a screenshot of the email on the band's Facebook page, along with his response, which read: "Mr. Simon, I am honored beyond words. We only hoped to pay homage and honor to the brilliance of one of the greatest songwriters of all time. Your compliment means the world to me/us and we are eternally grateful."

Simon took it one step further, posting a link to the performance on his Twitter account and calling it a "wonderful rendition."

Draiman has said that he was intimidated at first by the idea of covering the song. "It's very, very, daunting," he said. "You know, it's one of those mega-songs that are so classic and so timeless and so huge that many would view it as being relatively untouchable, and I had hesitancies. And then, to take it even a step further, I thought we were going to do it in the typical DISTURBED fashion — making it more upbeat, making it more aggressive. And it was actually Danny that made the strong suggestion to not do that."