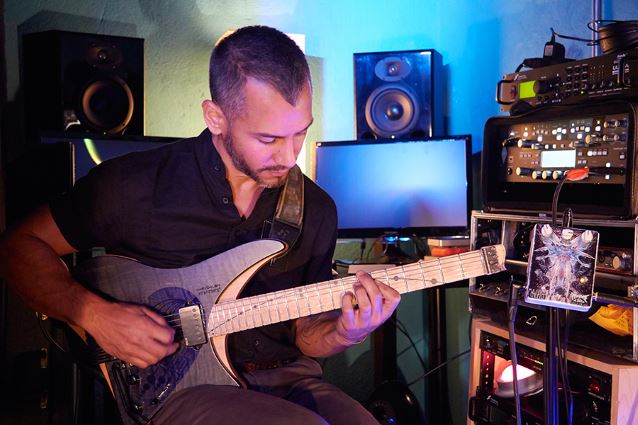 Paul Masvidal of legendary progressive rock innovators CYNIC has launched a web site where he is offering lessons in guitar, songwriting and the creative process.

Says Masvidal: "As a professional, working musician in the business for over 20 years, I have a background as a songwriter, band leader and producer: It's a history that's given me a unique perspective that I want to share with both students and working musicians who are looking for mentoring, education and practical skills.

"Lessons can cover a variety of topics: strict focus on guitar technique, soloing, how to approach the instrument organically; as an extension of yourself, songwriting, melodic construction and arrangement, production ideas, finding the song and creative input with your own writing process.

"I'm also interested in exploring techniques for working with your mind, meditation practices related to playing guitar, and untapping your own creative potential to discover your own voice. Music, the mind and body are pathways to making the most of ourselves!

"I'm deeply indebted to my guitar teachers for the wisdom they imparted, and will most humbly do my part to share a bit of what I've learned along the way.

"Teaching, for me, is about giving back and offering some solace on this unpredictable journey we all take when music becomes the center of our lives."

Masvidal's professional career began in 1991 when he and CYNIC drummer Sean Reinert were recruited by DEATH's Chuck Schuldiner to record that band's landmark death metal album "Human". Two years later saw the release of CYNIC's debut, "Focus". Heralded by critics and fans alike as a work of dizzying brilliance, "Focus" wove elements of metal, progressive rock and jazz fusion into a bold new sound that challenged listeners as it defied genre restrictions.

The group reunited in 2008 after a 13-year break to record "Traced In Air", their comeback opus. In his review, New York Times music critic Ben Ratliff wrote that CYNIC "should be understood not so much alongside any metal bands but along with the radical harmonic progressives in the last 45 years of pop and jazz: composers like Milton Nascimento, the BEACH BOYS or Pat Metheny."

During the band's hiatus, Masvidal founded ÆON SPOKE, whose ethereal indie rock was heralded as "beautiful, exquisite [and] destined for greatness" by Janice Long, BBC Radio. In 2004, the band received airplay on BBC Radio 2 and XFM for the single "Silence", leading to a week of London gigs and radio appearances. The following year, the track "Emmanuel" appeared in the indie breakout film "What the Bleep Do We Know!?" ÆON SPOKE songs have also appeared on the Warner Bros. television series "Smallville", "One Tree Hill" and in the motion picture "Cry Wolf". Their self-titled debut LP came out in 2007 on SPV.

Masvidal also writes and performs music for television and motion pictures through Still Motion Music, the Hollywood-based composer collective he co-founded. He wrote the main title for the Emmy-nominated NBC teen series "Operation Junkyard" and has scored series for H2, National Geographic, Bravo, ABC and PBS. Paul also worked as a session guitarist for Carsey Werner sitcoms "That '70s Show" and "3rd Rock From The Sun". In 2014, Masvidal produced and played guitar on actor Jim Carrey's spiritually reflective children's book and accompanying soundtrack "How Roland Rolls".

Since "Traced In Air", CYNIC has released two conceptual EPs: "Re-Traced" (2010) and "Carbon-Based Anatomy" (2011). Pitchfork music critic Hank Shteamer raved in his review of "Carbon-Based Anatomy": "The title track is a perfectly paced stunner... CYNIC sounds fully liberated, not just from their metal past but from any aesthetic concern other than assembling a great song." CYNIC's third full-length album, "Kindly Bent To Free Us", released in 2014, was hailed by Prog magazine as "an album that transcends all the limitations of genre and era... There are few albums which can claim such a remarkable hold." The album rose to No. 4 on Billboard's Heatseekers chart in February 2014 and was No. 1 on CMJ's Loud Rock chart the following month.