"Traced in Air", the new album from reunited progressive metallers CYNIC, has had its North American release date pushed back to November 25 from the previously announced October 28 (via Season of Mist). The CD will be made available in Europe on November 17.

Commenting on the delay, guitarist/vocalist Paul Masvidal stated, "When Season of Mist made us aware of the release date change, it was immediately apparent that this offered us the potential to spread the word even more about this album. Sean [Reinert; drums] and I are extremely proud of the new record and are looking forward to sharing it with CYNIC fans around the world, even if we have to wait just a bit longer. We're thrilled about touring with OPETH next month in Europe, and of course the states tour beginning in January is going to be on fire!"

The first run of CYNIC's "Traced in Air" CD will be a limited-edition hard cover digipack with the cover artwork embossed to further showcase the beautiful cover by renowned artist Robert Venosa, as well as eight original pieces of art paired with the eight songs found on the album. Venosa created the unmistakable cover and visuals for 1993's groundbreaking "Focus" album. This limited edition will also feature a poster of the cover art. Also released the same day is the "Traced in Air" collector's box, which will only be available for order online and limited to 1,000 copies.

The box contains the following:

A brand new audio interview with Paul Masvidal is available for streaming at Metalhead.ro.

"Integral Birth", a new track from CYNIC, can be downloaded at this location.

Returning from the "Focus" era for the new eight-song, 35-minute effort are are founding members Masvidal and Reinert along with Sean Malone (bass), and joining the band in the studio is newcomer Tymon Kruidenier (guitars/growls). The band recorded the effort at a California studio with producer Warren Riker (DOWN, SANTANA). 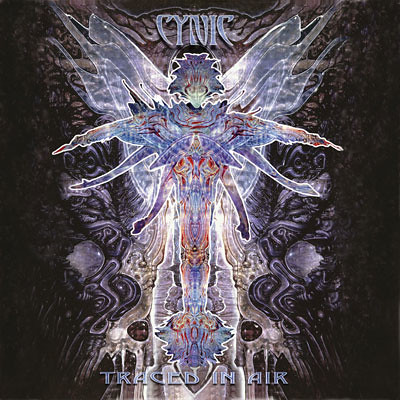