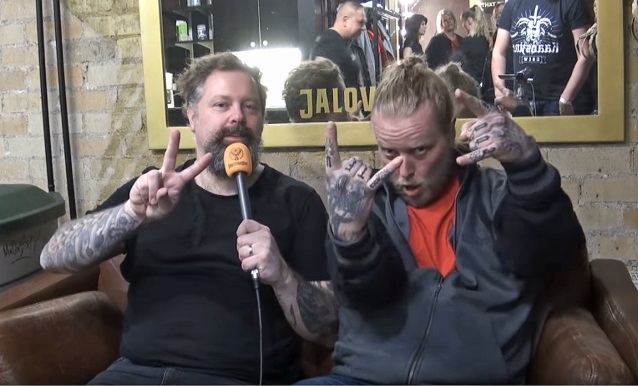 Finland's Kaaos TV conducted an interview with CYHRA members Jesper Strömblad (guitar) and Peter Iwers (bass) after the band's October 27 concert at Nosturi in Helsinki, Finland. You can now watch the chat below, A couple of excerpts follow (transcribed by BLABBERMOUTH.NET).

On how the two former IN FLAMES members came to play with each other again:

Peter: "We were always friends. We didn't hang out as much, because I was always away to begin with. I was invited to this band by Jesper. We talked and they asked me if I wanted to play, so we always had a good relationship. It's weird to explain, because when you are away so much, a lot of the friends you have at home, you don't see them as much. And we used to be away together so much. And this is from my end — I was always on the road, and we didn't see each other as much. But we tried to stay in touch as much as possible, and the last couple of years has been even more of that, and then he invited me to the band."

On whether Jesper intended from the beginning to ask Peter to join CYHRA:

Jesper: "Actually, no, because I had no idea that he would… I knew he was up for it, because we talked about [him] playing double duty. But in the end, of course, we wanted to have a solid lineup that only concentrated on CYHRA, so we're really happy that he chose to change bands."

On CYHRA's plans for the coming months:

Jesper: "We're not gonna start from the start, so to speak. So we're going to take relevant shows and tours for us. Not that we think we are big stars — we have to work as everyone else to promote the band — but the fact is that we can't be — as Peter said — touring three hundred days a year in a van, because we have families and we have businesses at home, and it's impossible. Twenty years ago, if someone told me, 'Here's a plane ticket. You'll be home in three years,' [I would have said], 'Hell, yeah! Let's go.' But you can't do that anymore."

Iwers issued a statement in November 2016 saying that he was leaving IN FLAMES "to pursue other endeavors." He has since been replaced on the road by Bryce Paul, a member of the Southern California pop-rock outfit IVES. 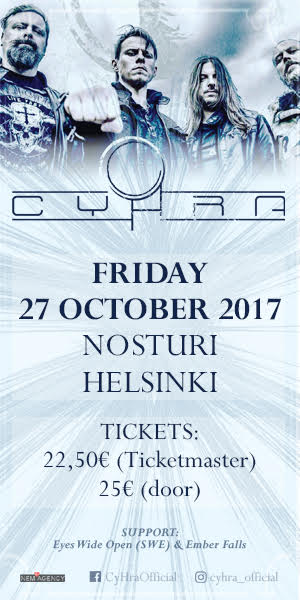