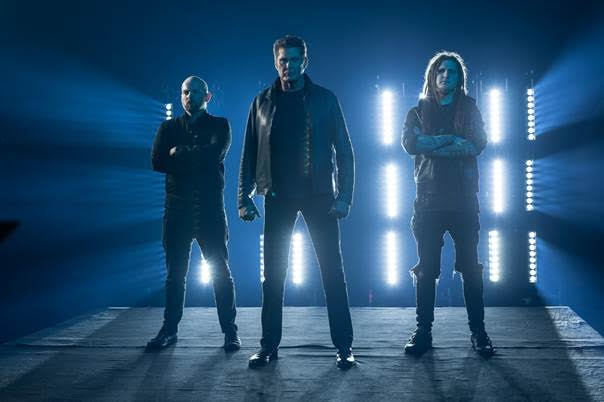 Keyboardist/vocalist Martin Kames and guitarist/vocalist Bernth Brodträger of Austrian duo CUESTACK, who recently collaborated with David Hasselhoff on his first metal song "Through The Night", went on the podcast "Side Jams With Bryan Reesman". They spoke about their music, as well as their work in video editing, lighting and video design, and graphic design. It turns out that Brodträger was previously a touring member in extreme metal band BELPHEGOR and currently plays in SEILER UND SPEER, one of the biggest pop bands in Austria. Kames has not only designed tours for Hasselhoff but has worked for MACHINE HEAD in Europe for the last decade.

"The really weird thing about me outside of metal is that I play for a really famous band in Austria, and just in Austria, because [of] the dialect and the way they talk and write songs," says Brodträger who also has his own YouTube guitar channel with over 200,000 subscribers. "I think people in Germany don't even understand it, so it's just an Austrian thing. It's pop music, but it's actually kind of cool. I think it's a bit disturbing. If you're really into rock and metal, you would think why would I play in it? But it's actually all about the lyrics. It's kind of funny but also a bit deep. I think it doesn't make sense to listen to it without understanding the lyrics at all. That's the main thing."

In the metal world, Kames has designed lights and video for MACHINE HEAD's European tours throughout the last decade. He said it was a challenge that he enjoyed taking on.

"Robb Flynn is super specific about his lighting wishes and needs," explained Kames. "The first tour I did with them in 2011, they let me film every show. He watched it from the beginning till the end every day and was giving me notes like, 'I don't like this, I want this. I don't like this.' And I learned so much from this band because before that I was doing my thing. It was fine. But since I worked with MACHINE HEAD, it was like, 'No, I don't like this. I want this.' And he was always right. I just didn't see it at the moment. So that raised me on a totally different level 10 years ago, but it was also really challenging because you have to be so focused all the time."

Brodträger also contributed to the last MACHINE HEAD tour. "The stage design was basically a huge, blood splattered wall," he said. "They went for white instead of black to be different, and it was really fun to design these huge panels with hand painted blood. I painted those blood patterns on my tablet, and it looked really cool."

CUESTACK also addressed their collaboration with David Hasselhoff which came about as Kames had designed for some of the singer's European concerts. But it took some time for things to come together. A year before they shot the video for "Through The Night", Brodträger wrote five possible songs for the singer/actor to pick from.

"We always gave him options, but later we found that it's not good giving him too many options," recalled Kames of Hasselhoff. "Just give him the song that we want to do and he's fine with it. Which is amazing if you know that he works like this, but it's hard if you want to give him options because you're trying to be nice. So it was a long time until we finally decided which song and when we're going to record it. It was almost a year before the recording which took place in April 2019."

The group later funded the music video post-production through Kickstarter and have a "making-of" documentary in the works. "We couldn't really get a real story or plan or storybook for the video shoot because we didn't even know if it was gonna happen," said Kames. "It was basically, he's gonna be here next week. So we just filmed as much as we could with 10 different settings with LED walls and lights and just a black background and the chair. Just film as much as we can and do everything later in post pro. That was a lifetime project because we had so many ideas. Then we had so many sets that we later threw away because it didn't work in the final edit. It took forever. We had a huge video team on set, and I would say in retrospect, it was just there to impress him, to give him the impression that we know what we were doing. We literally could have just filmed it with one small camera because everything was done in post pro. We even changed the colors. So we had this huge camera team and cinematic cameras and lighting and everything. But looking at the final product, it wouldn't have been necessary at all because everything was changed later. It was a lot of work."

The editing process took time but the song and video finally arrived. Further, touring previously with Hasselhoff ended up being easier for Kames and went more smoothly than he expected.

"Touring with David was such a new experience for me," said Kames. "When you work for a band, they usually have their egos and they tell you what they want to have — 'I want this, I want that' — and you always have to talk them out of it if it doesn't make sense somehow. But with David, from the first second, he was like, 'Okay, Martin, what do I do?' I didn't even have a microphone to talk to him because I'm not a director. I'm a lighting designer. And I never talked to the singer. I was like, 'You're David Hasselhoff. I will tell you what to do?' But he was so into having a director giving him directions like he's used to on movie sets. 'Okay, I'm here to do a job. Tell me what to do.' It was a big honor, but it was like, 'Is this really happening?' And I just started giving him fake advice, like, 'Just come from the left side and go to the middle and then walk up the stairs.' But we got into it, and it started to be more and more funny each day. We were joking around, and I was getting into so I was making fun of him and he was laughing about it. One day, I had this LED wall and I had the three red lights from KITT [the car from 'Knight Rider'] when he was talking, and I made a button doing this blinking thing. Always when he was talking, I just pressed the button like KITT was talking. And he didn't know it because he was facing the audience [during] soundcheck. More and more people were like, 'Hey, look at the LED wall.' Then he finally got it — 'What are you doing?' It was like this all the time. So it was a very new experience being so involved in the soundcheck. It was really funny."

Fans of Hasselhoff's unique collaboration with CUESTACK can also get the extended "Through The Night" box set, a digipak CD featuring a retro synthwave remix by BEARTOOTH singer and mastermind Caleb Shomo, as well as an unplugged version and two additional CUESTACK songs. The box set also contains a unique poster, gym bag, autograph card and baseball cap. "Through The Night" is available for physical purchase at the official CUESTACK webshop.